Swami’s Yoga Retreat – A Review of My Stay 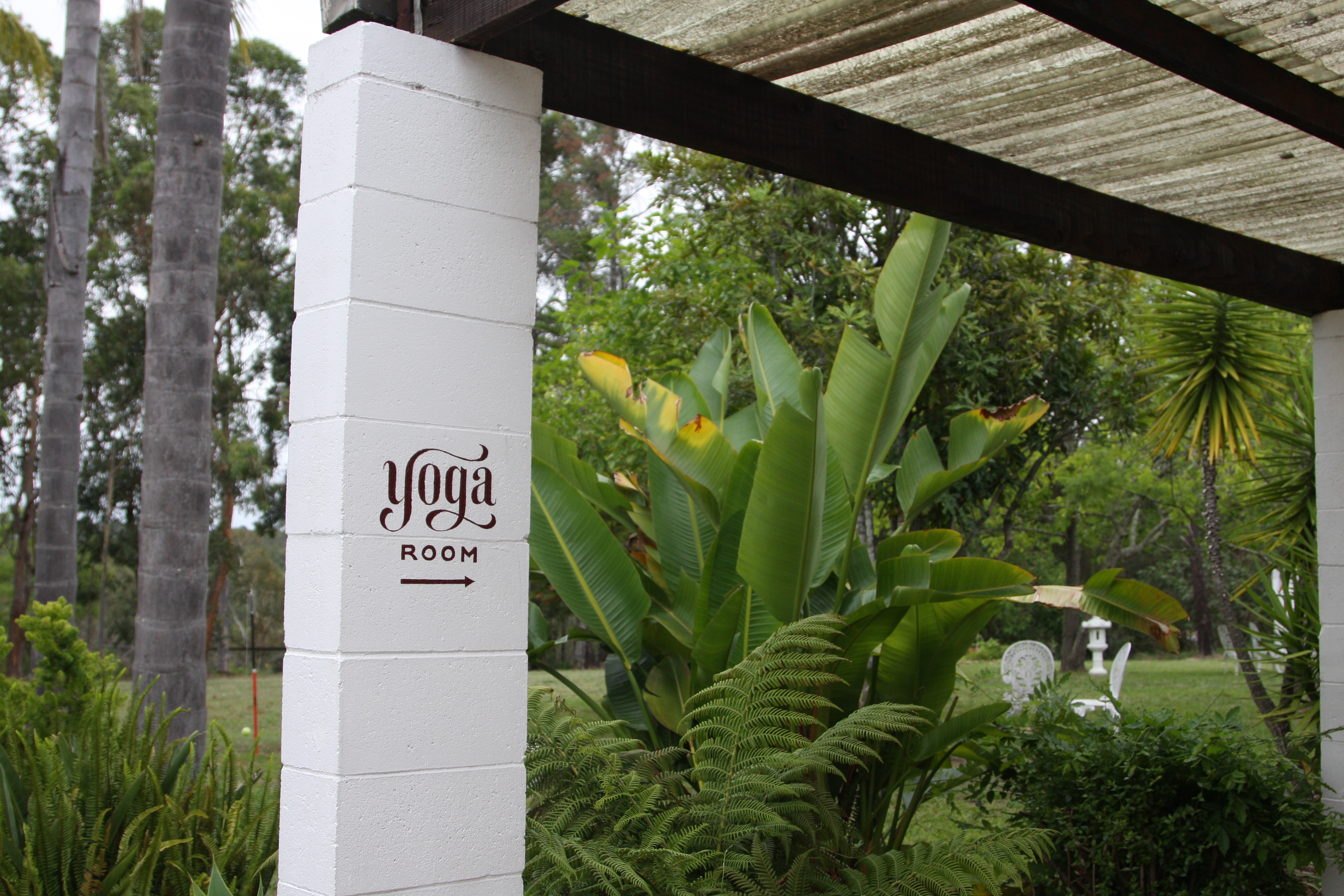 I climbed out of the car, stepped on the soft grass, felt the heat of the day in the air as it touched my skin, and suddenly the most incredible feeling of calm and peace settled over me. This was my immediate impression upon arrival of Swami’s Yoga Retreat (website). It didn’t leave me for the entire three nights I was there and it is still my #1 memory.

Once I had booked my trip to Australia, obviously I had to research things I wanted to do while I was there. Of course, there were the normal touristy things to see and do but always, at the back of my mind, was a yoga retreat. I researched and found a bunch of different ones but I just couldn’t decide. Then I saw Swami’s Yoga Retreat in Kenthurst, just outside of Sydney, offered on Groupon. I bought it.

You never know what to expect when you book things on-line. I read reviews so I had a general idea, but it’s still not quite the same as seeing it for yourself. Swami’s is not a luxury style retreat. What it is though, is a place to go to breath, do yoga, meditate, go for wilderness walks, swim, have a massage, relax and basically just release stress. A real and authentic place where you are free from judgement. And let’s not forget the most amazing vegetarian food I have ever eaten. Ever.

Swami Sarasvati is a yoga expert that has been credited with bringing yoga to Australia. She had a very popular TV show weekday mornings from 1968 to 1978. I believe it was in the 1990’s that she and her husband started the retreat but the buildings are older than that. While the place is older, it is still well maintained and clean. The rooms are basic but again, very clean, and have an ensuite. There is no air-conditioning, but there is a ceiling fan in each room and the buildings were designed to stay cooler when everything was closed during the day.

I was visiting Swami’s Yoga Retreat in the middle of January so it was quite hot while I was there. The yoga room had a breeze flowing through it, helped by the ceiling fans, but it still ended up being almost like hot yoga in the afternoons. That little bit of discomfort was alleviated by the pool though. I’m not sure if anyone used the spa (hot tub) but the pool was very popular. 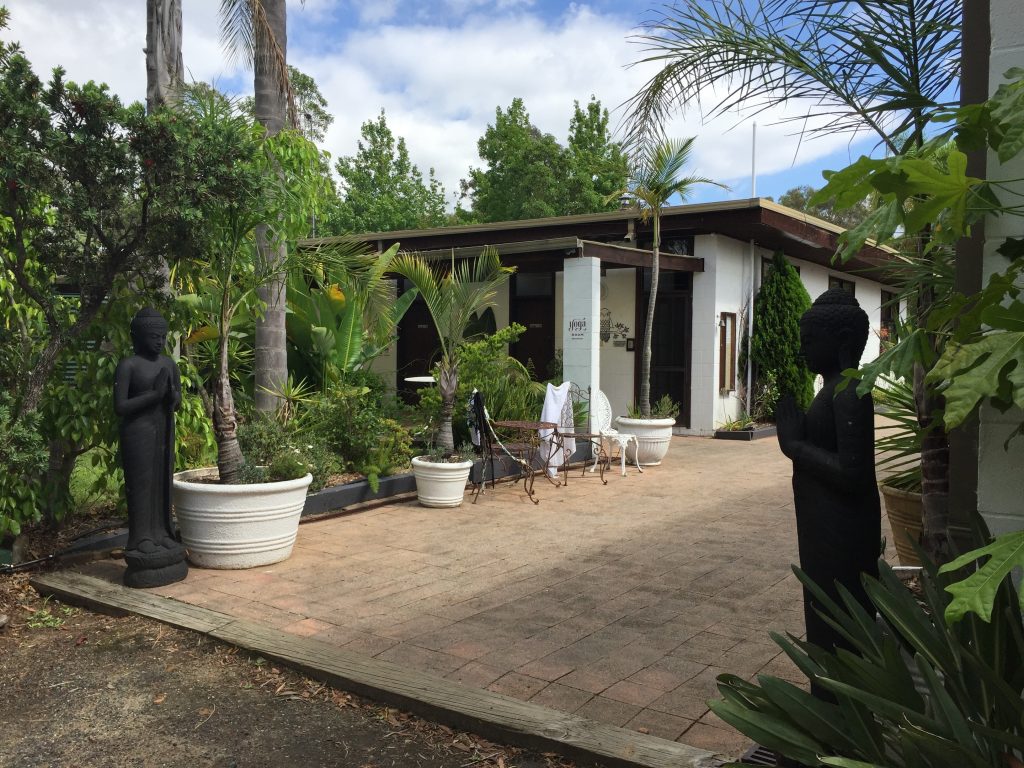 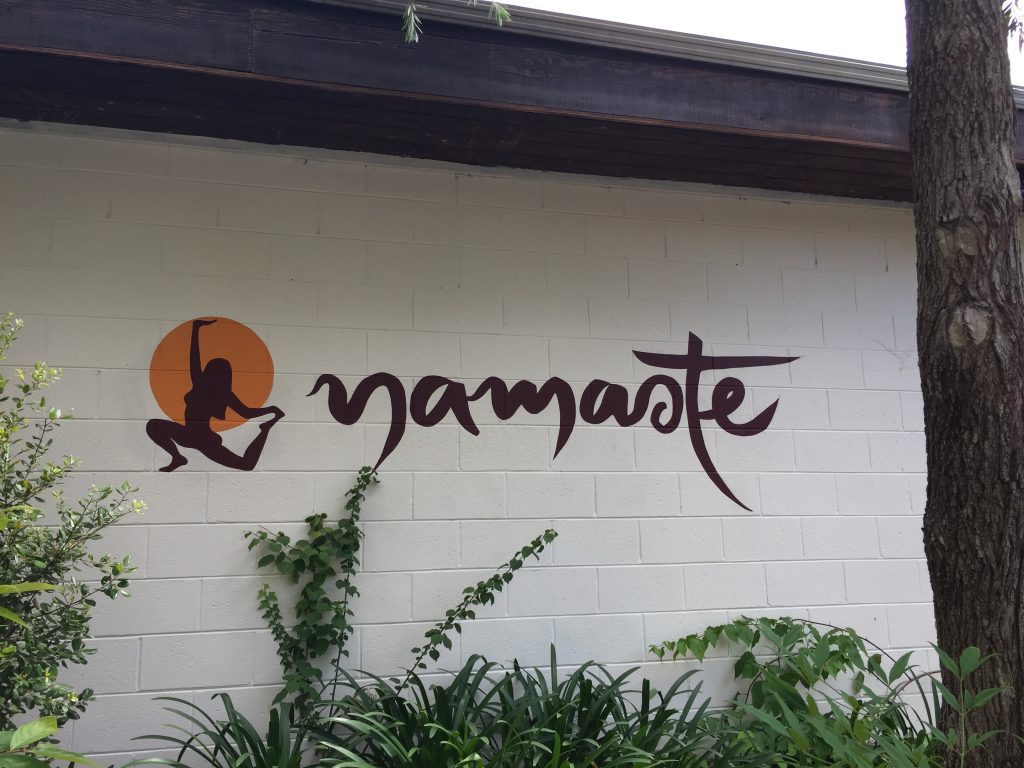 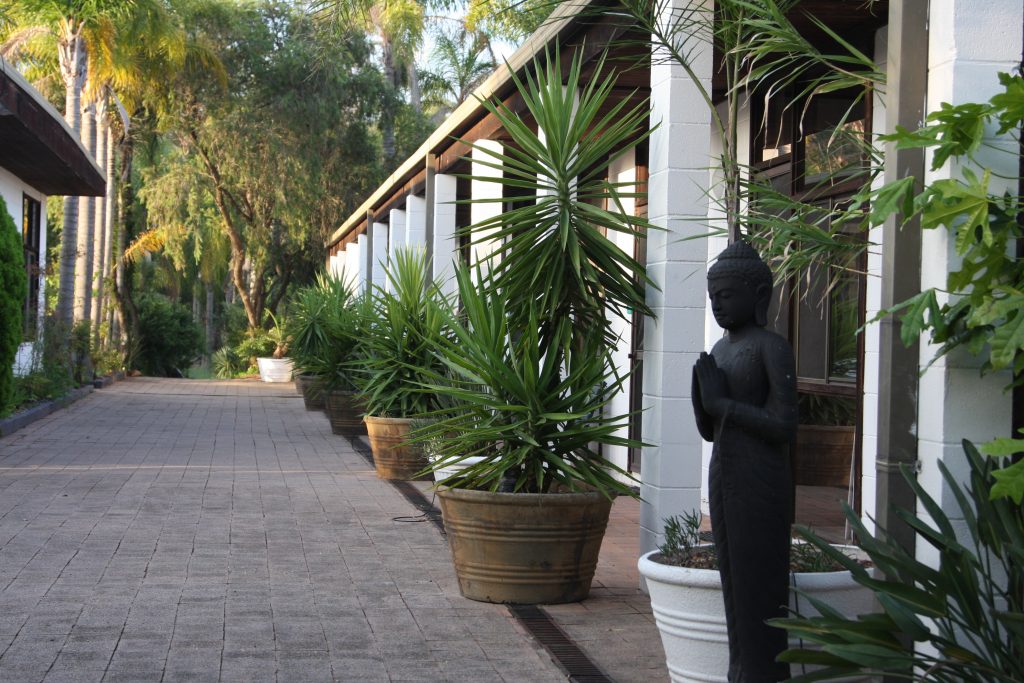 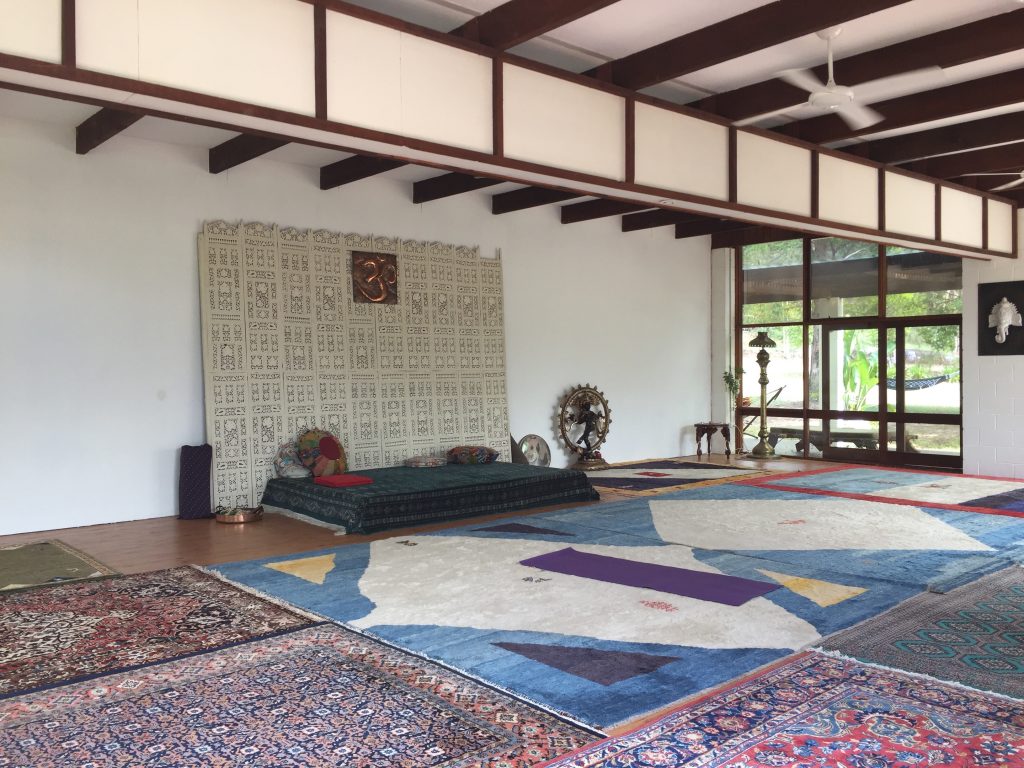 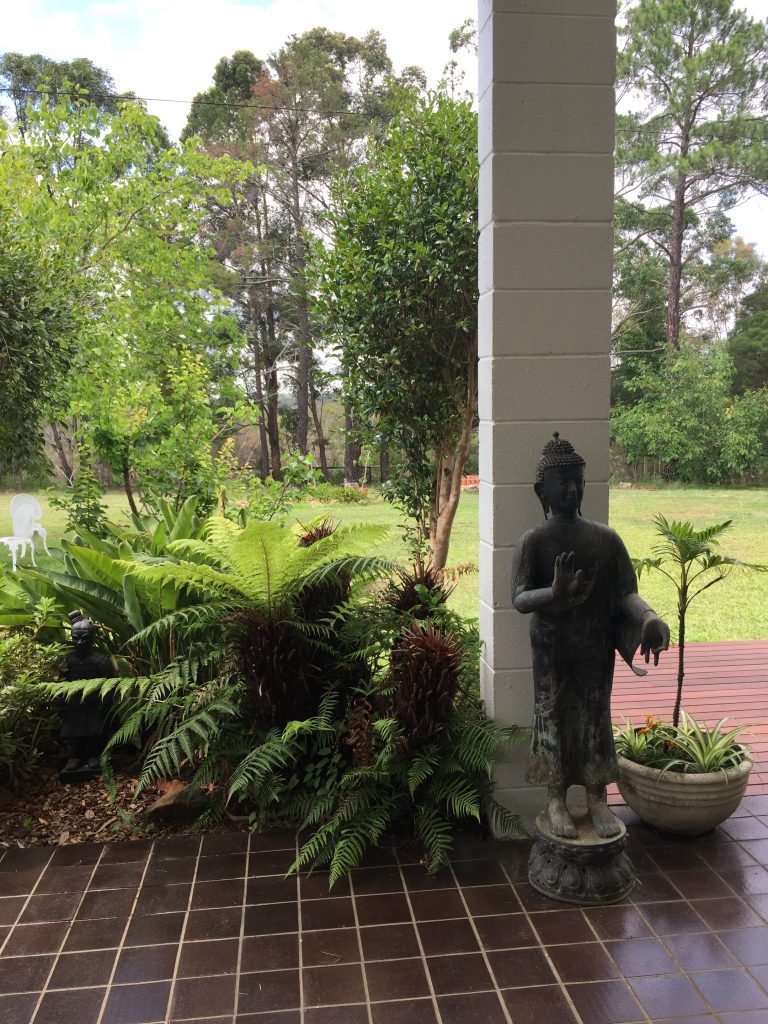 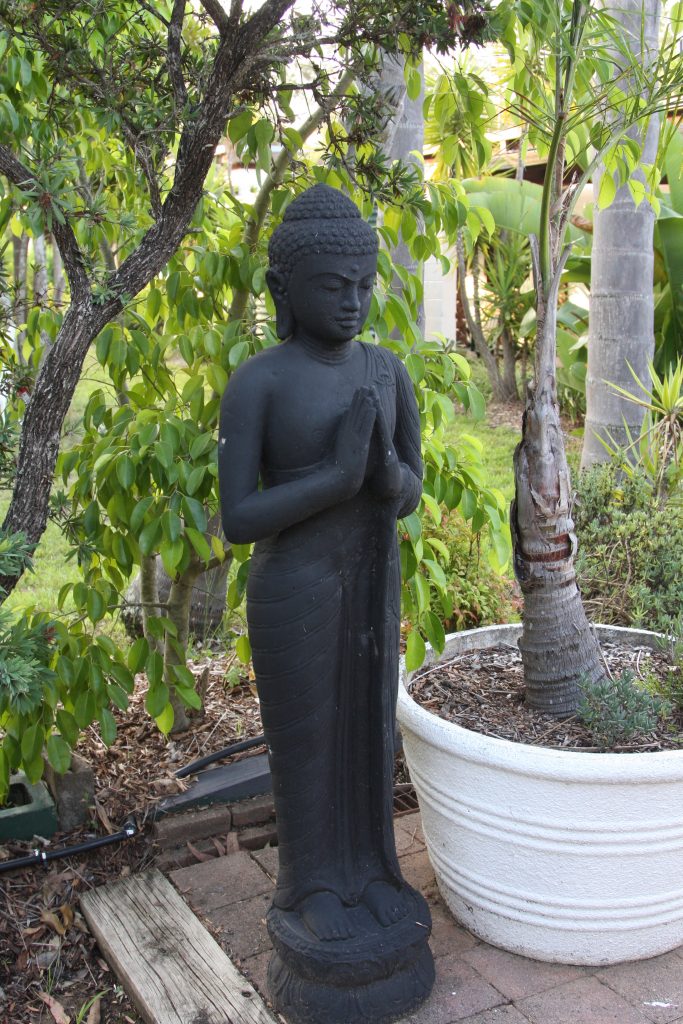 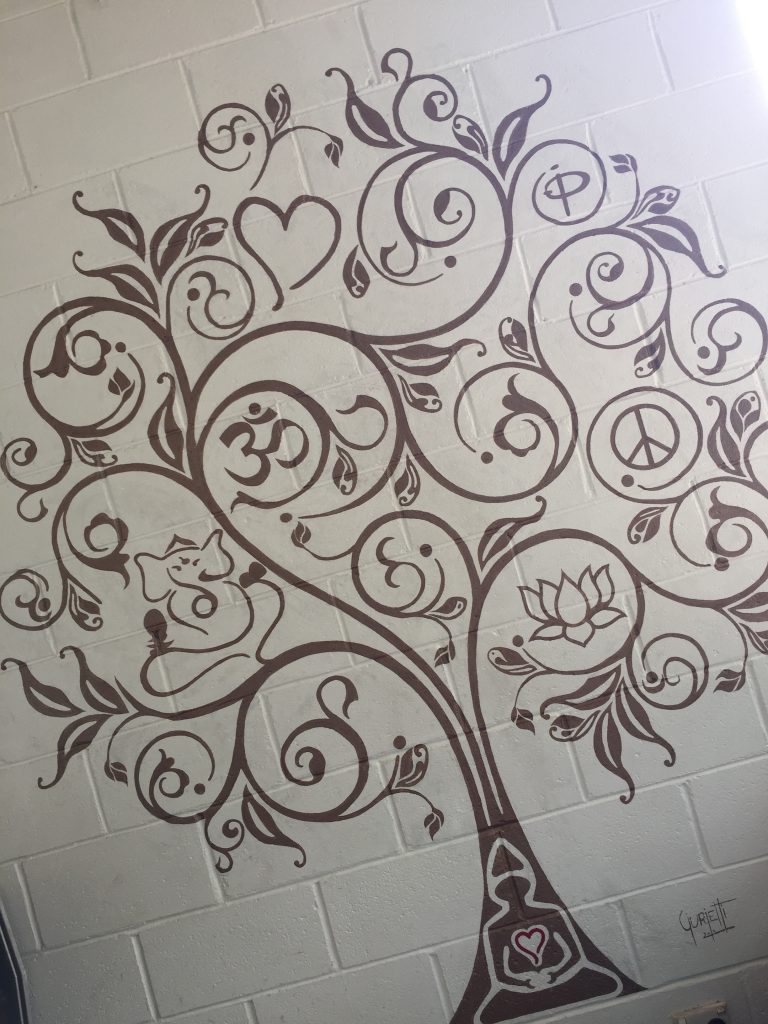 Upon arrival, you receive a welcome booklet. It contains a sample of the daily program, which is not written in stone and can be changed. It also contains a morning wake-up stretching routine, a prayer, a recipe, an action plan for you to fill out as well as explanations on yoga, meditation and how to use meditation beads. This is a great booklet that I still refer to.

The Schedule and Time

While every day the daily schedule is put on the board in the dining room, it can change. It’s also a good idea to not get too hung up on times. Swami’s Yoga Retreat has a very relaxed atmosphere and while most meals and events started on time while I was there, not all of them did. That was one of my favourite things about being there. No one was giving little dirty looks, or judging anyone for not being somewhere exactly on time. It was so liberating and relaxing. Things just flowed organically and it felt rather comforting to me.

During one of our meditation sessions we were given a handout of ‘8 Simple Meditative Exercises’. I really like this list. Now that I am home, it is so easy to get caught up and forget how to find peace and relax. The list reminds me.

All the people you see working at Swami’s are volunteers. They all offer different knowledge and talents. I think it is great. You end up with people who are choosing to be there as opposed to people who are just there to receive a pay cheque. It also means the same people might not be working each time you visit. That could be a good thing or a bad thing. While I was there, the chef was a man from Sweden who was working on his chef’s apprenticeship. As I said above, it was the most amazing vegetarian food I have ever tasted. It was incredibly flavourful and varied, all while filling me up.

Swami’s son Sanjay runs the retreat now. Once you have a chance to talk to him, you realize where that overall feeling of calm and peace you receive from the retreat begins. Sanjay is a very calm, positive, serene person with a slow, quiet voice. He shares his mother’s teachings and the things he discusses about yoga, meditation, life balance, gratitude, etc, are all shared to help. I found him to be very knowledgeable and a wonderful calming presence. He believes, and lives, what he teaches.

I was at the retreat to learn, rest and heal. I was filled with nutritious, delicious food. Taught some new meditation techniques. Shown how important life balance is. Given the chance to exercise different ways, several times a day. Had the opportunity to meet some great people. Wisdom was shared with me. And I slept, a lot. I felt I got what I was looking for from Swami’s Yoga Retreat and even a bit more. I really enjoyed my time there and I wish I lived closer so I could attend more often.