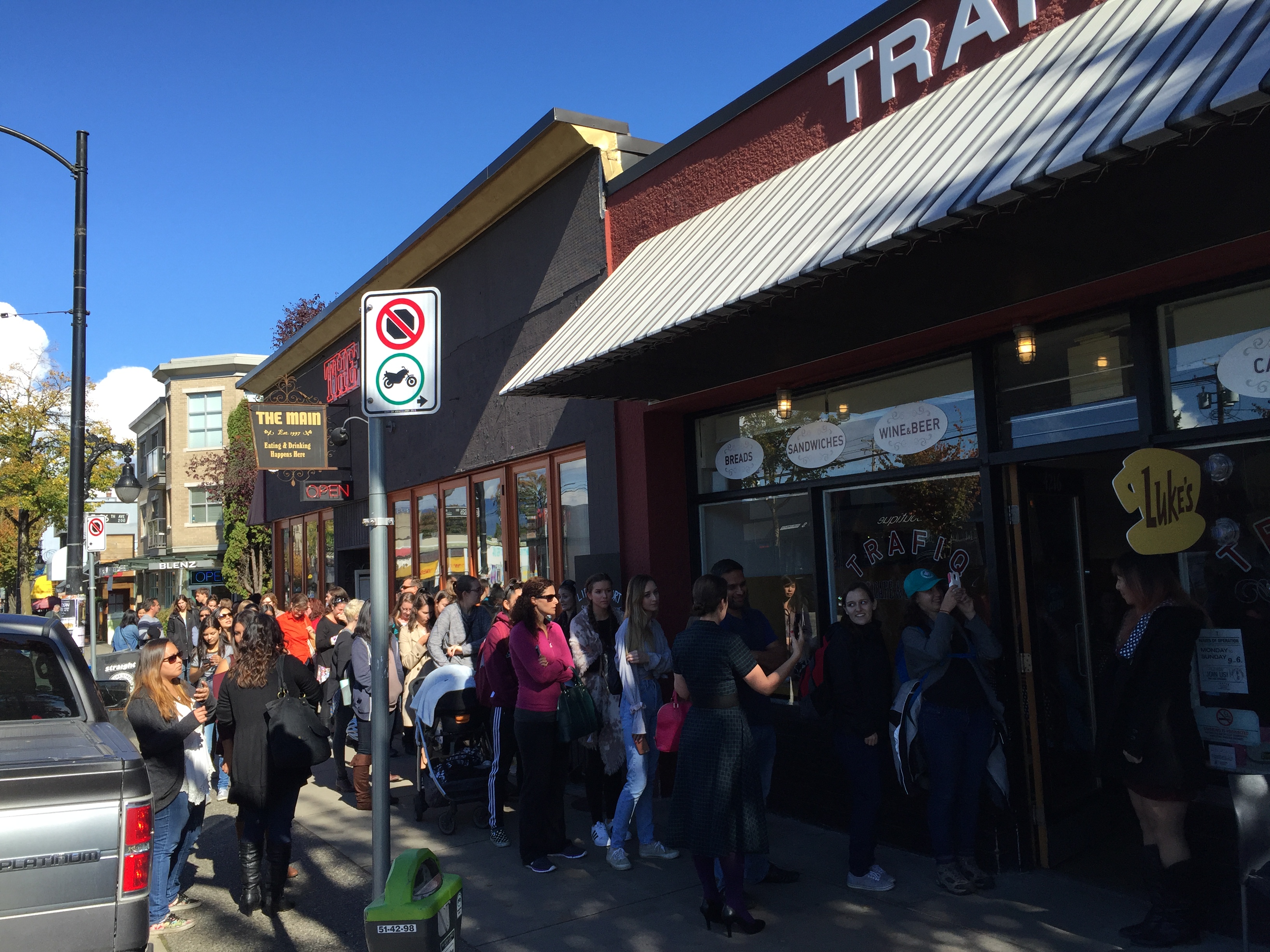 I was out and about today, stopped at Starbuck’s, and was checking my Facebook while waiting for my half sweet, coconut milk, hot chocolate when I saw a post about the Luke’s Diner pop-ups to promote the new four episode season of Gilmore Girls coming on Netflix November 25th. I figured I would read it and probably have to drive down to Seattle one day soon but it turns out it was today; the good news was there would be one in Vancouver. I hummed and hawed for like maybe three minutes when I realized, why wouldn’t I go? LUKE’S DINER! So I drove out to Trafiq Cafe on Main Street in Vancouver.

Trafiq Café & Bakery became Luke’s Diner for the day. I arrived at approx. 1:20 pm and walked past the line-up to check the place out. There was a temporary Luke’s sign hanging from one of the front windows and people were walking out with Luke’s cups and cup sleeves. I’m not even going to try and hide it from you, I was completely geeking out. I watched that show every week or I set my VCR to record it. It was that tv show. That one I just couldn’t miss because I had invested in Lorelai & Rory’s life. I felt for them and with them. There were the conversations, the relationships, the life that was like everyone’s life but not quite like anyone’s life.

After I checked out what was up, I went to the back of the line-up; down the sidewalk and around the corner. There was a woman from a local radio station, I believe, on Facebook Live interviewing people and she was saying someone told her they had waited two hours and were now at the door to the café. I was a little stunned but I was there, I wasn’t going to give up. I didn’t expect the range in ages of everyone waiting though until I remembered this was a tv show now on Netflix for a whole new generation to fall in love with. That made me feel the warm fuzzies of happiness. Two of the gentlemen in line were even there for their wives who were unable to make it. The dedication of fans was wonderful to see. It took approx. 1 hour and 15 minutes to get into the café and order myself some cake. Unfortunately, they had already run out of the 500 cups and cup sleeves they had received for the event so nothing for me to take home. The staff were all wearing Luke’s baseball hats backwards, plaid shirts and jeans with Luke’s aprons. There was also the No Cell Phones sign. It was awesome. I’m going to venture to say, it was even better than the time I drove to Coquitlam because one of the 7-11 stores became a Kwik-E-Mart for the day. 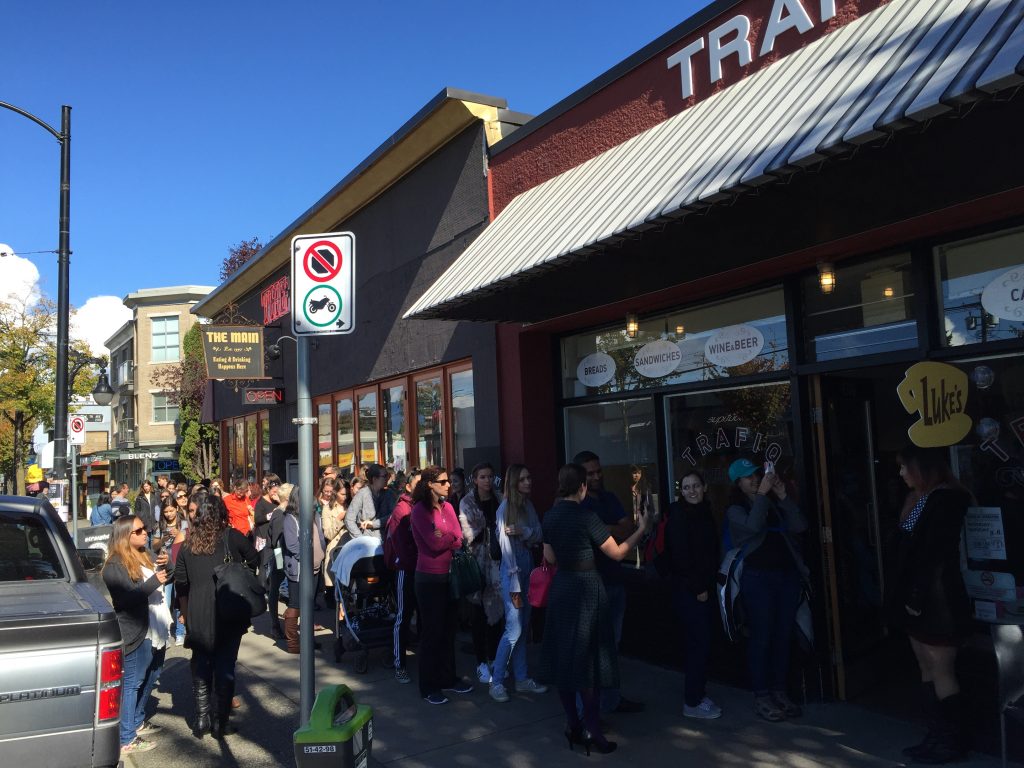 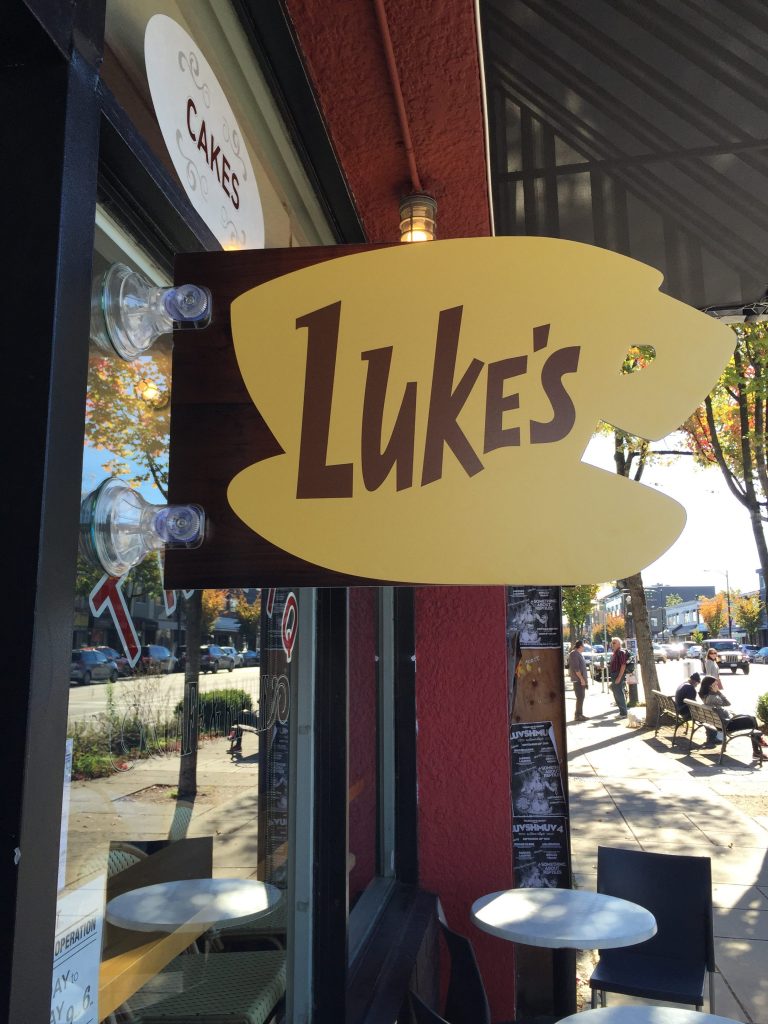 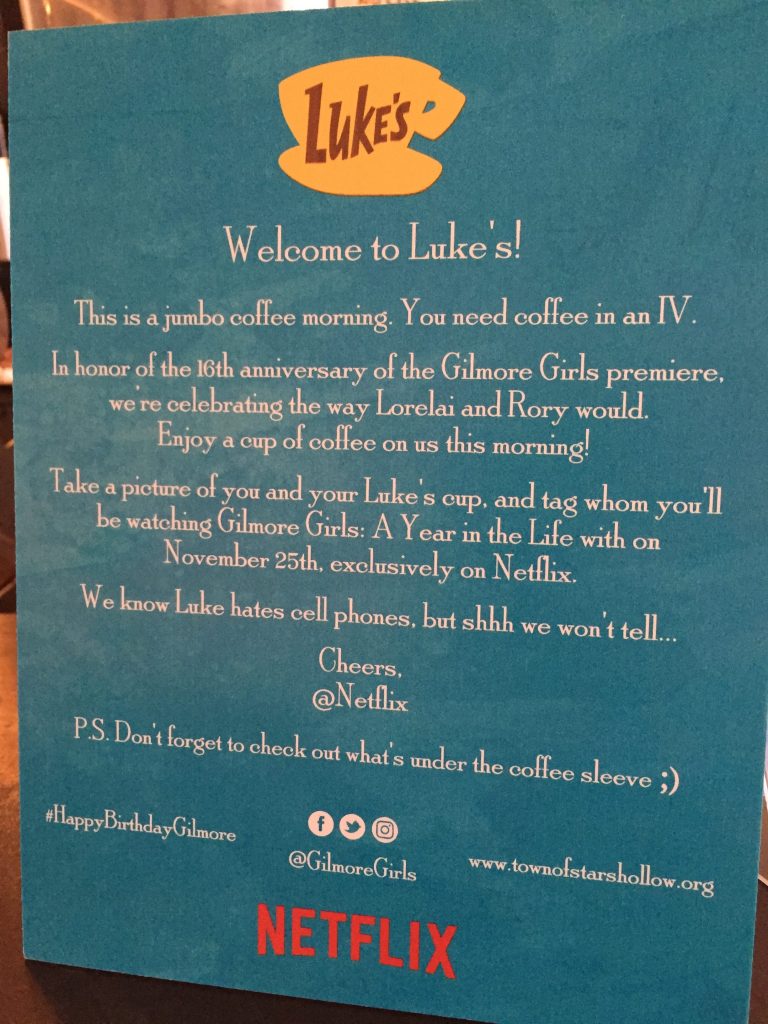 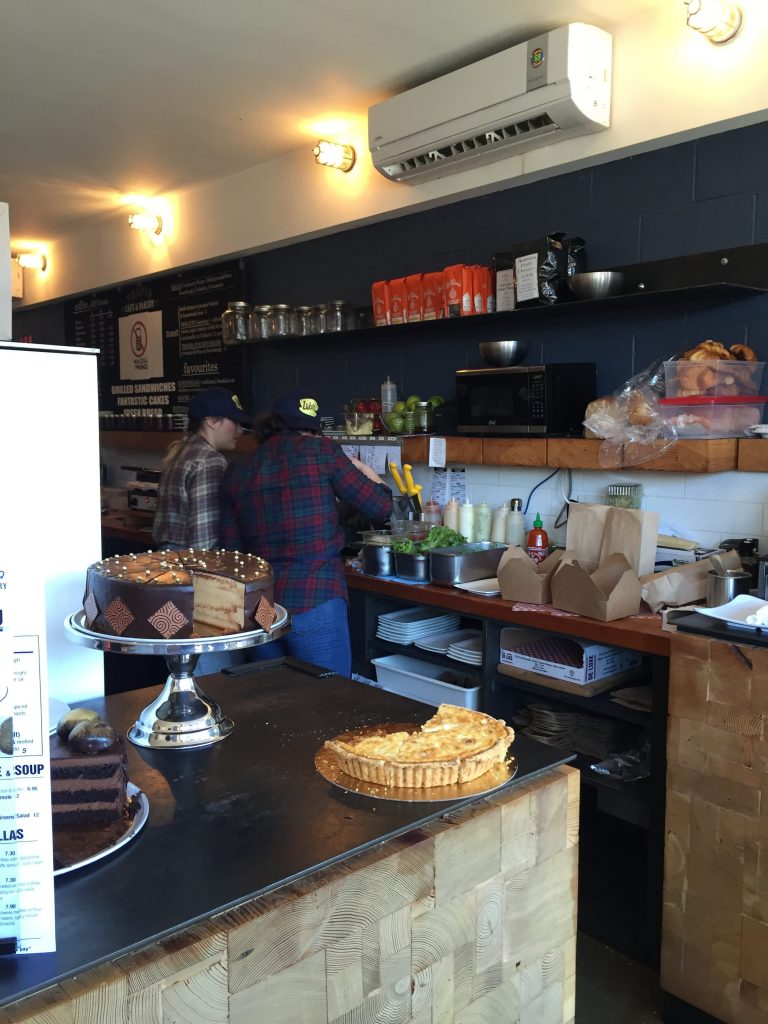 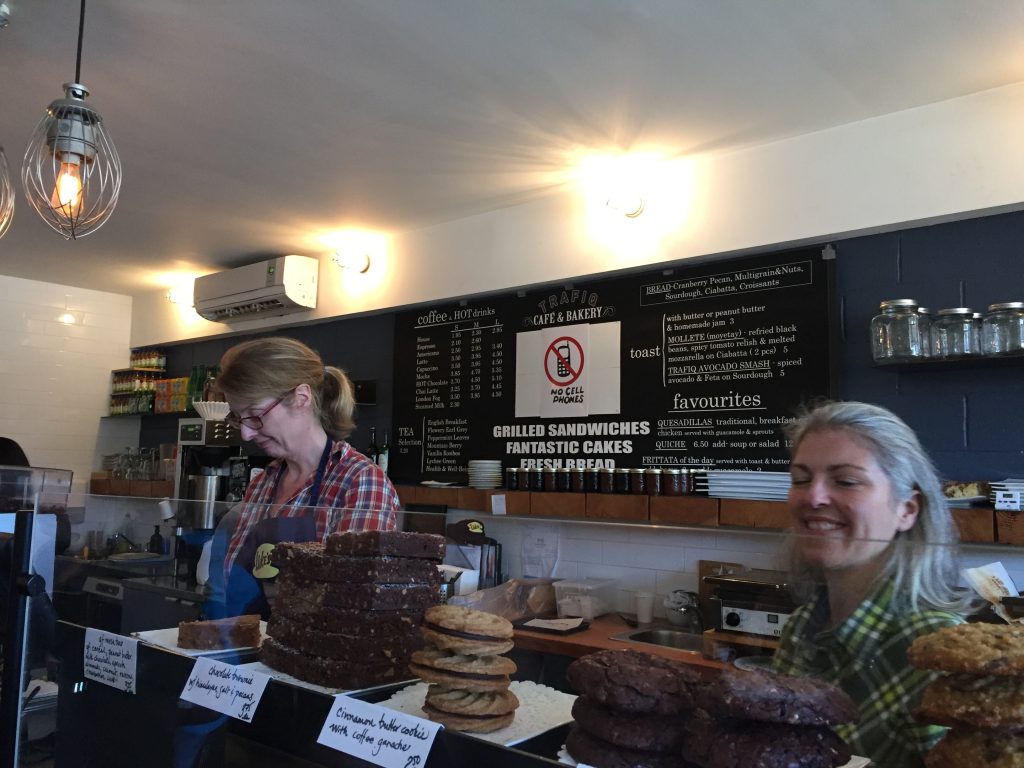 Obviously Trafiq Café & Bistro was crazy busy today. Inside the tables were full of people eating lunch and outside there was still a line-up going down the sidewalk at 2:40 in the afternoon. Everyone was busy getting their picture taken with the Luke’s sign while they waited. The Café had a very yummy looking menu with wonderful choices for lunch but I had heard several people talking about how great their pastries were so those are the only things I was thinking of when I got to the till. Everything looked so good but Carly, a psychology student who I met in line and spoke to for over an hour about a variety of subjects, recommended the chocolate cake so I ordered a slice of the Vanilla Salted Caramel cake as well as one of the Chocolate Decadence, to go. She also told me the Coconut Cloud cake was another favourite of hers. 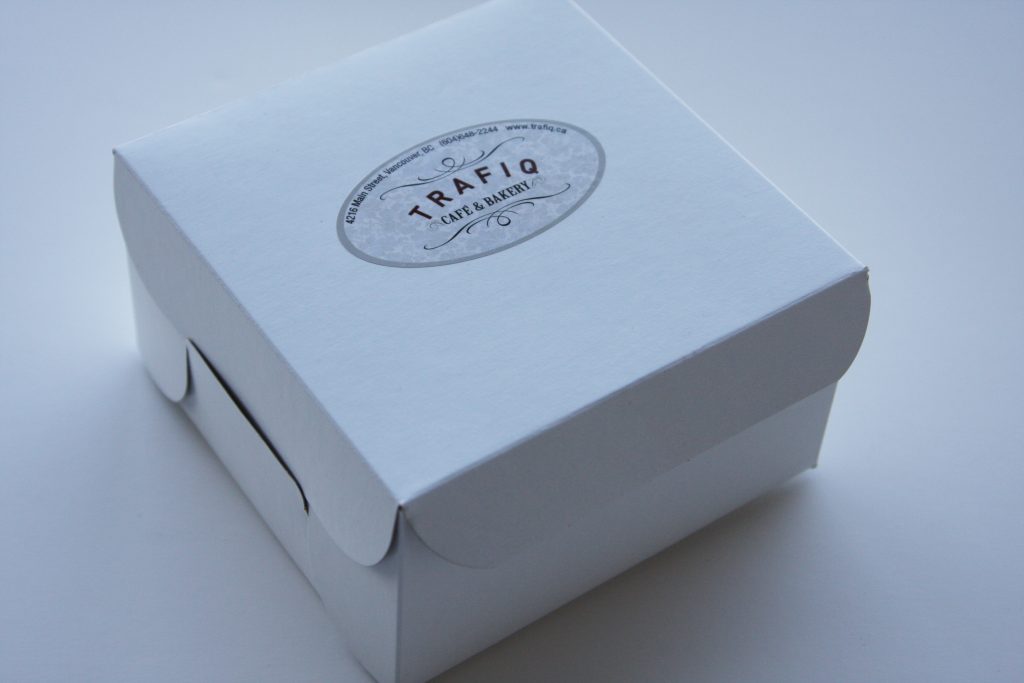 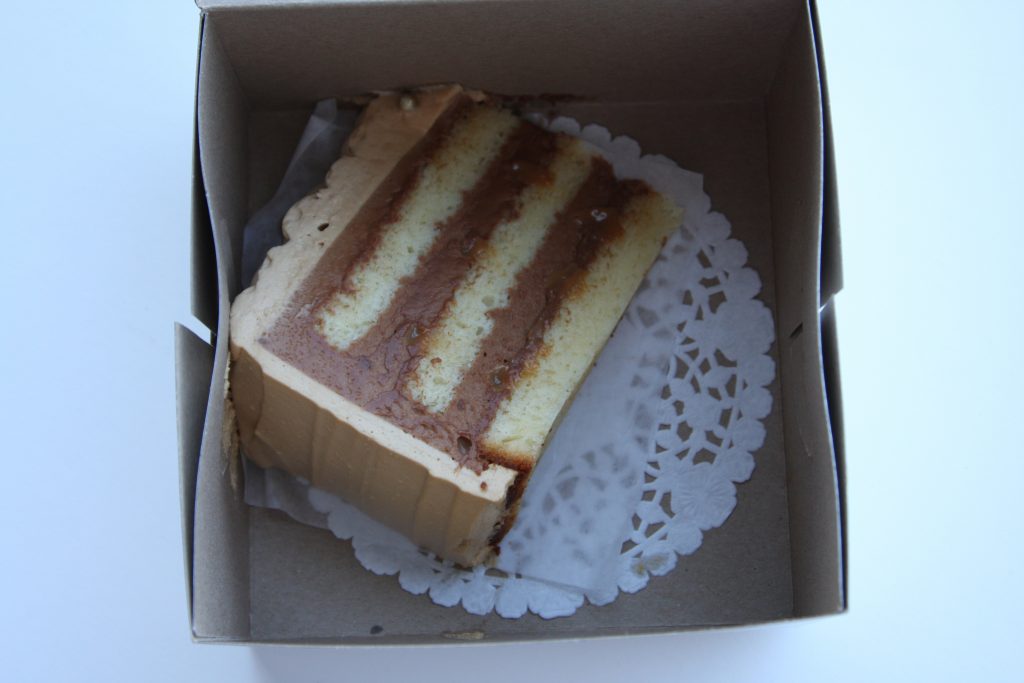 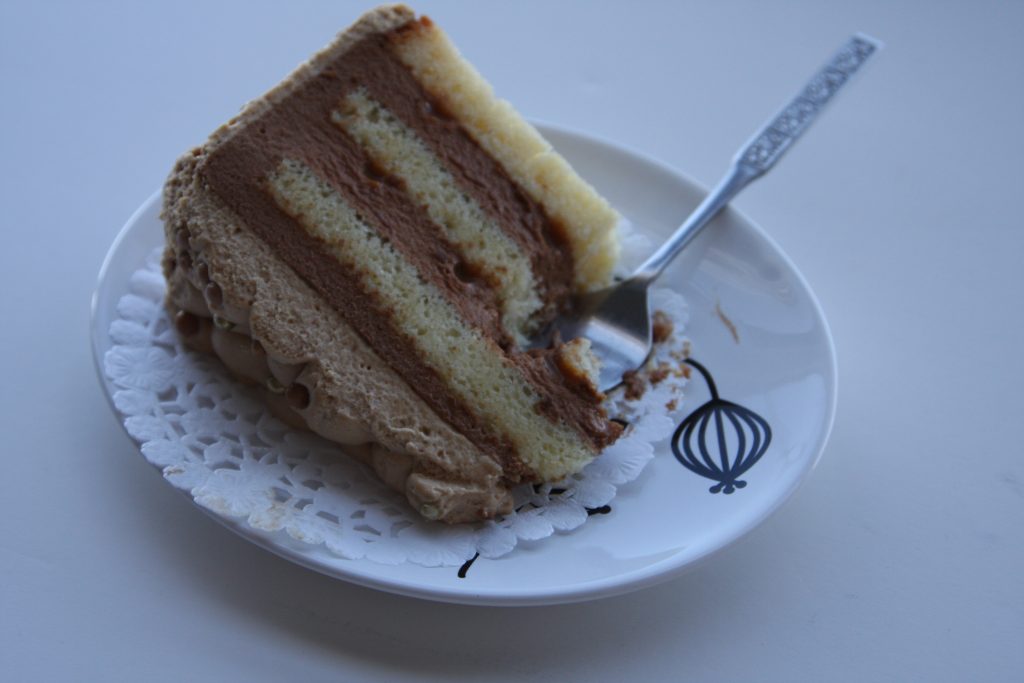 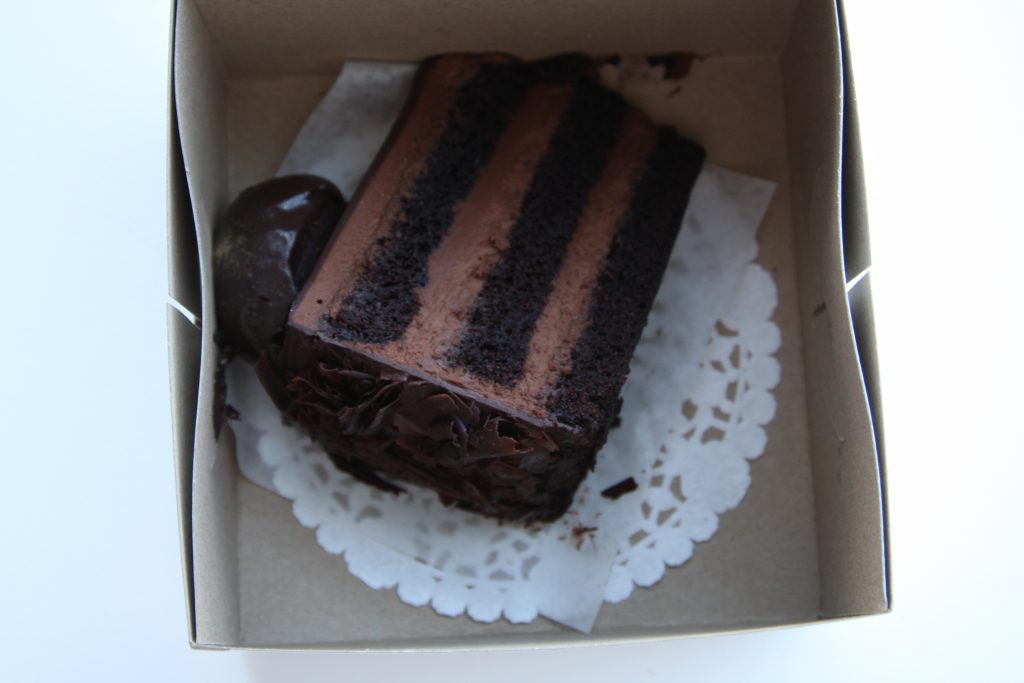 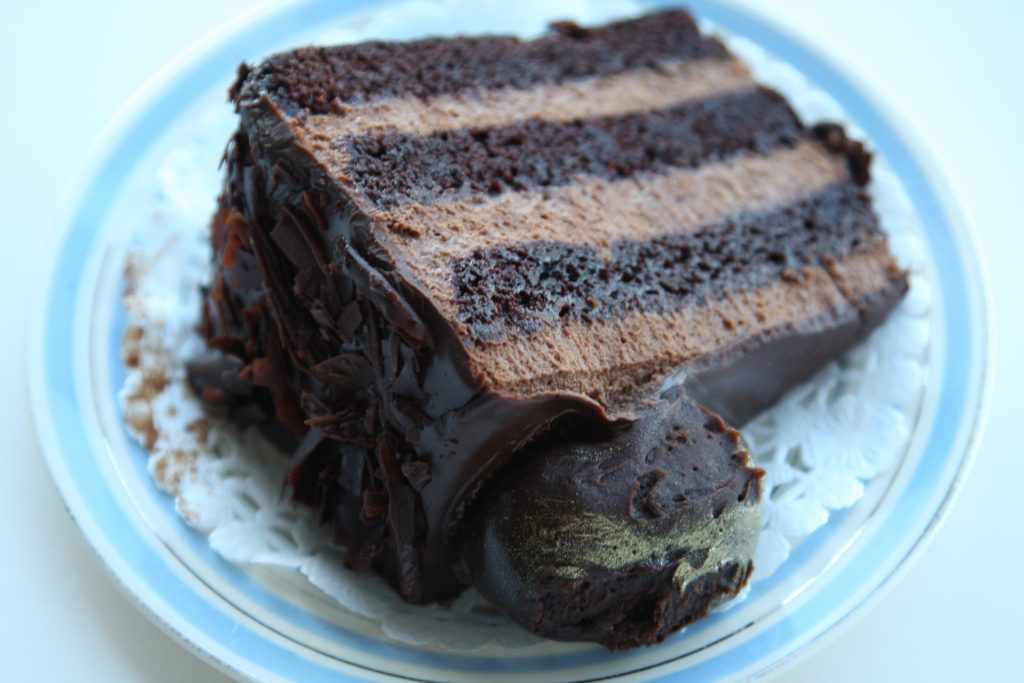 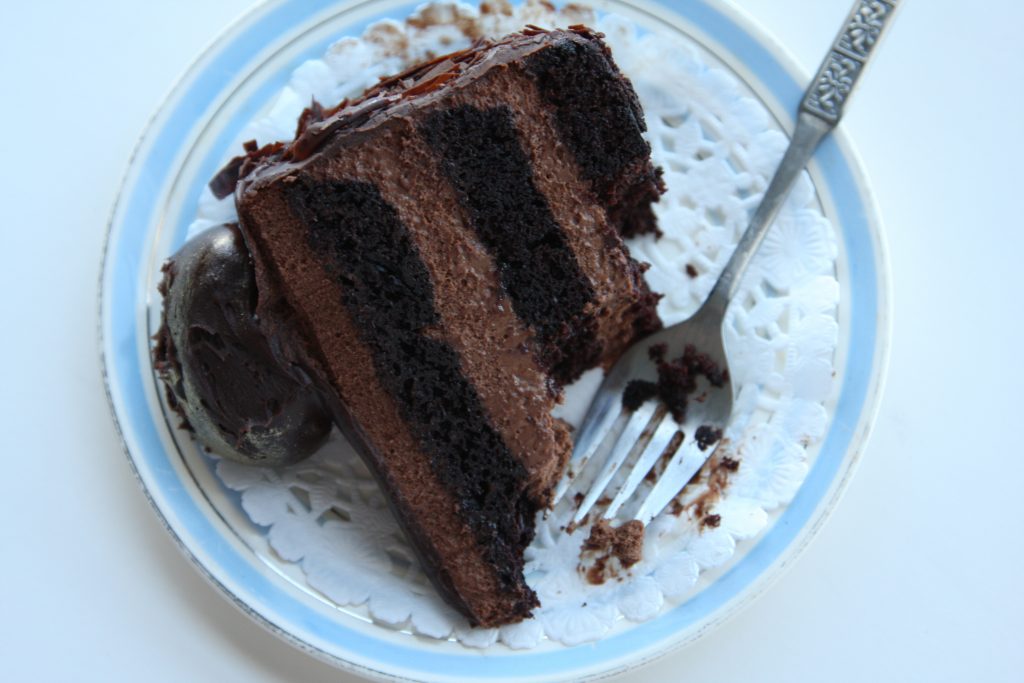 The Vanilla Salted Caramel Cake was moist and very sweet. When I ate it in pieces to break apart the flavours and textures, I realized the cake, the fluffy filling and the fluffy icing weren’t really sweet at all, it was the caramel sauce that was on top of each layer of cake that was doin’ it. I’m not really sure what type of icing it was but it was fluffy almost like a whipped cream but it didn’t taste like a whipped cream really. There was vanilla cake, caramel sauce, then filling, all done up in three layers with icing covering the top and sides. There were even these wee little covered biscuit balls as decoration on top. I loved the cake and the icing but I found the caramel sauce too sweet for me and the filling almost tasted a bit like coffee which I don’t like. I thought this was a great cake but I personally will keep trying other flavours the next time I am there.

I’m not kidding, this place really knows how to do cakes. I’m not sure I have eaten at a bakery with such moist, fresh cakes before and I like to think of myself as a cake connoisseur. The Decadent Chocolate Cake was super chocolatey. Again there were three layers of moist cake and fluffy filling but this one was covered with a dark chocolate ganache. As part of the decoration each slice also had a ball on top that was a cross between cookie dough and ganache, flavoured of chocolate with a faint something else that I couldn’t quite name (think lavender, rose, or orange). It was a really good cake. The chocolate was a bit darker in flavour than commercial store bought cakes so it was much more rich and with each layer also having its own unique flavour and texture like the vanilla salted caramel, it was pure delight. I would definitely eat this cake again but I really want to try other flavours and other pastries from this bakery now.

While Netflix did a great marketing job today with the Luke’s Diner pop-ups, I think that Trafiq Cafe & Bakery did an absolutely amazing job keeping up with the demand, staying friendly, providing great service as well as wonderful product.