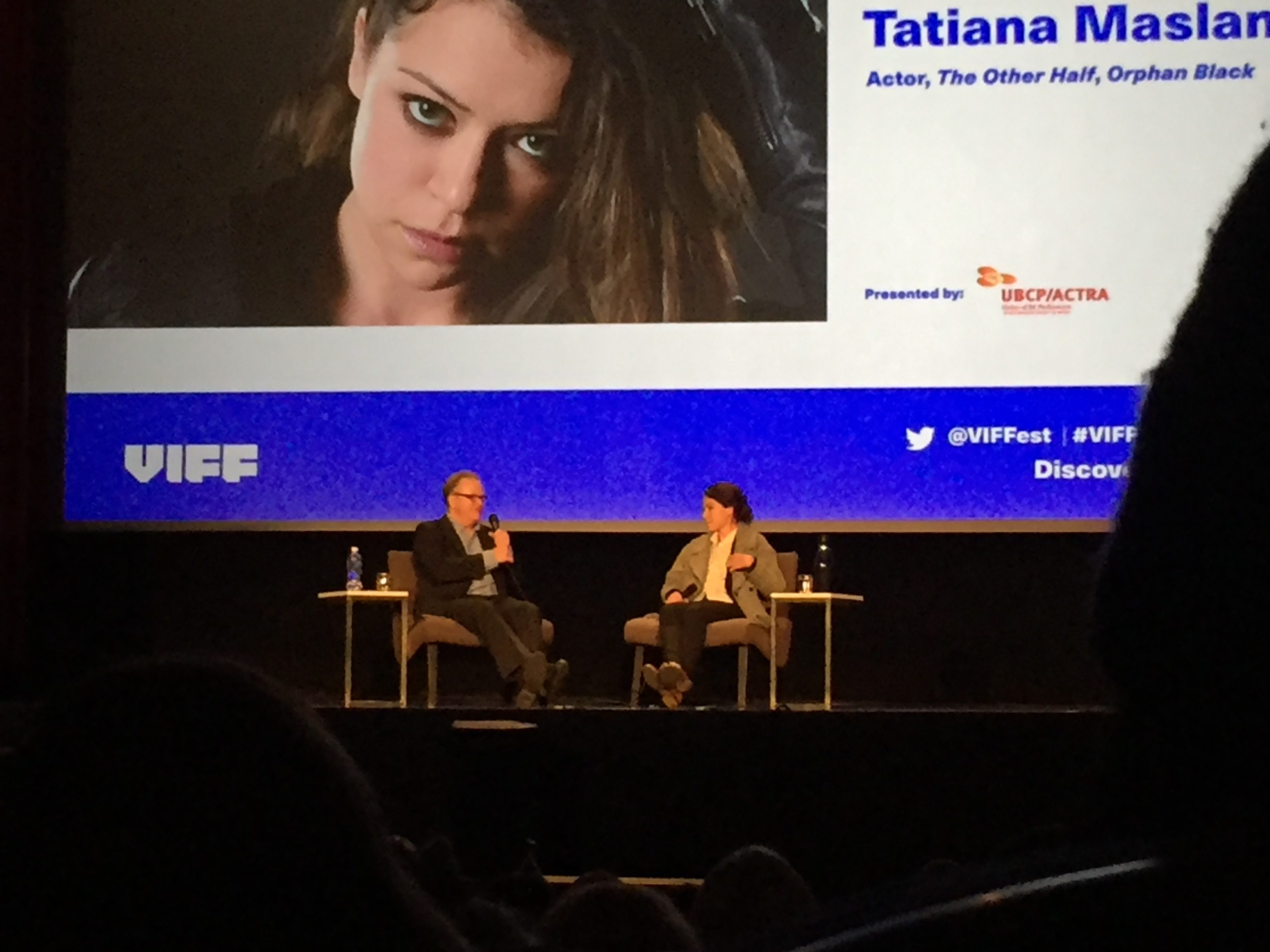 This year The Vancouver International Film Festival made some changes in the way they are doing things. One of those changes is the VIFF HUB and Creator Talks, an opportunity to listen to people who are creating a movie, talk about the movie.

I went with the only expectation being that I was going to listen to a very talented person speak. I left thinking I couldn’t have been more affected if I had paid a ton of money to see an inspirational speaker.

Tatiana Maslany was absolutely delightful. She was warm, open, humble, encouraging, thoughtful, inspirational, professional, generous, uninhibited, knowledgeable, funny, serious, passionate…….I’m going to stop before I gush. I never knew I could have such a girl crush before.

I love Orphan Black so when I saw this year VIFF was doing Creator Talks and one of them was going to be with Tatiana Maslany, I spent several days trying to decide if I wanted to go. You see, I’m not a, fawn all over someone because they are famous, person. Actually I’m probably more the opposite. My long-time crush is Keanu Reeves. I say long-time because the first time I crushed on him was a commercial advertising his Babes In Toyland movie, on tv, for Christmas, in the mid to late 80’s. That man still does it for me and I refuse to listen to anyone who chooses to speak badly about him to me, around me, near me. One year, as a birthday gift, two of my friends bought us all tickets to see his band play when they came to town. I stood there for the entire show with my arms crossed, staring at him. Someone tried to talk to me and I shut them down so fast in the most aggressively verbal way that by the end of the show there was a berth around me and I’m sure the word stalker & crazy were being used to describe me. Even then, we went home after the show. We did not wait at the back door, we did not hit up all of the hotels or bars or anywhere else looking for this magnificent creature. He is a man, an incredibly beautiful man, who does a job. I don’t know him personally so I don’t know who he really is or even if I would like him once I got past staring at his incredible face and listening to his magical voice. I think he’s like a unicorn. A stunning, beautiful, magical creature that you look at and love. I mean seriously maybe that unicorn turns out to be a dick and every time humans get close to it, it kicks them in the head. We don’t know. Maybe that’s why we only ever see unicorns in pictures or fairy tales, because we can’t get close to one. I don’t know if I want to get close to Keanu, I don’t want my dreams of his wonderful personality crashing against the kick of reality. I’ve read a bunch of stuff over the years and he sounds like a great guy but I also have doubts about actors. Do they ever turn off the acting, do they know how, are they so narcissistic they can’t see past themselves and their ‘art’?

Tatiana Maslany took all of my preconceived notions and doubts about actors and made me cry. I’m as shocked as you. I literally had tears in my eyes when she was describing her new movie screening at VIFF this year, The Other Half. She was explaining how the characters in this movie are afraid of the darkness they see in the other person but they are also afraid of not having that other person in their lives. About how in life all humans are afraid, our lives are lived and based, around fear. It hit me so hard I started tearing up. This is a subject very close to me right now as I am at a personal crossroads in life and I am searching for what/where is next. It reflected my own thoughts of how I have been living my life and how I want to change it. Obviously she didn’t know this was going to make me emotional but I did accept it as a very good validation point for my decision to see her talk. 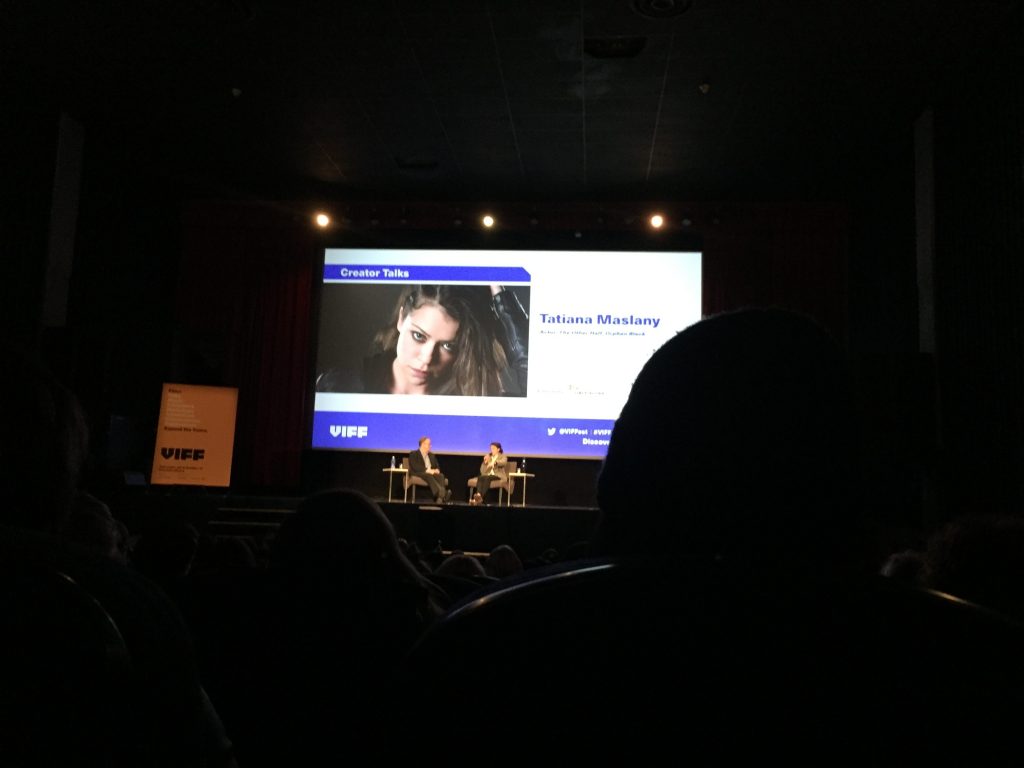 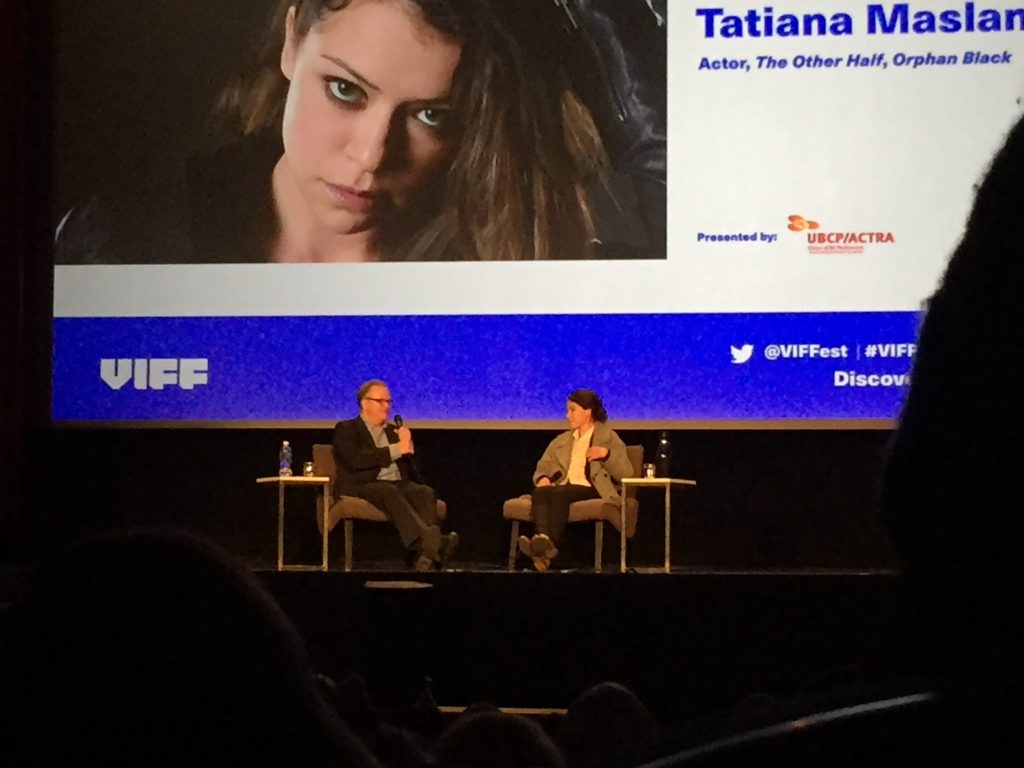 I admit that while I generally know what critics think of projects, I do not follow what critics specifically say really because I always like to draw my own conclusions. This means I was unaware of who Tim Goodman was before he walked on stage this afternoon but I was very impressed with his knowledge of Tatiana Maslany and her work. They had a very easy conversation that covered the three movies she has out/coming out (The Other Half, Two Lovers and a Bear, as well as Stronger with Jake Gyllenhaal), her scope of experience and work, some of her life experiences, as well as the reason most people love her and came to see her, Orphan Black. It lasted about 30 to 45 minutes (why would I pay attention to the time when the conversation was so riveting) before he opened up to a Q&A session. During their conversation, Tatiana was very open about how she feels about projects she chooses to be part of, what she would like to do in the future, how taking the job of Orphan Black and it’s many characters was done so she couldn’t be pigeonholed in a role, but ended up pigeonholing her in the roles she is offered (no, she doesn’t only want to play several characters in one project), how she came to be involved with The Other Half, and what it was like working on this movie with her off-screen boyfriend (he knows her so well, she couldn’t use any of her tricks, she had to be present and not afraid to open herself up for the character). I never once felt this conversation was scripted, acted out or anything other than real. A few times there were shouted comments from the audience and Tatiana took them in stride and engaged with the person.

The Q&A session was one of the best sessions I’ve been to, even though I have never been to one of these kind of talks before. Everyone congratulated Tatiana on her recent Emmy win, which she accepted graciously. The questions ranged from research of roles with injuries (from a physiotherapist, who Tatiana took the time to thank for helping people), to what is the ‘thing’ she looks for when choosing a project (from a screen writing student), to how hard is it to play a clone pretending to be another clone (from a member of a 20 or so group that watches and celebrates every episode of Orphan Black together) to when did she know she wanted to be an actress (from one of a set of mature twin actresses in the new A Series of Unfortunate Events tv series). Tatiana answered every question with honesty, kindness and thoughtfulness. Even when the twin actress was promoting her own show, Tatiana was graceful and encouraging. These weren’t your standard ‘actor’ answers. At the end of the, more than one hour, Tatianna went down the few stairs to write autographs, take pictures and shake hands with fans even as the VIFF staff were trying to wrap the event up and get her out of there. Very classy Tatianna, very classy.

I was planning on seeing The Other Half movie tomorrow, October 2nd, but to be honest, my new girl crush is demanding more Tatiana Maslany the person time so I’ll now be going tonight. There is a Q&A after the movie with her and the screenwriter/director for me to experience. 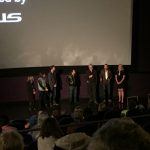 Read about the VIFF movies I attended and my experiences at them here.