Melbourne – A Few of the Things to See and Do 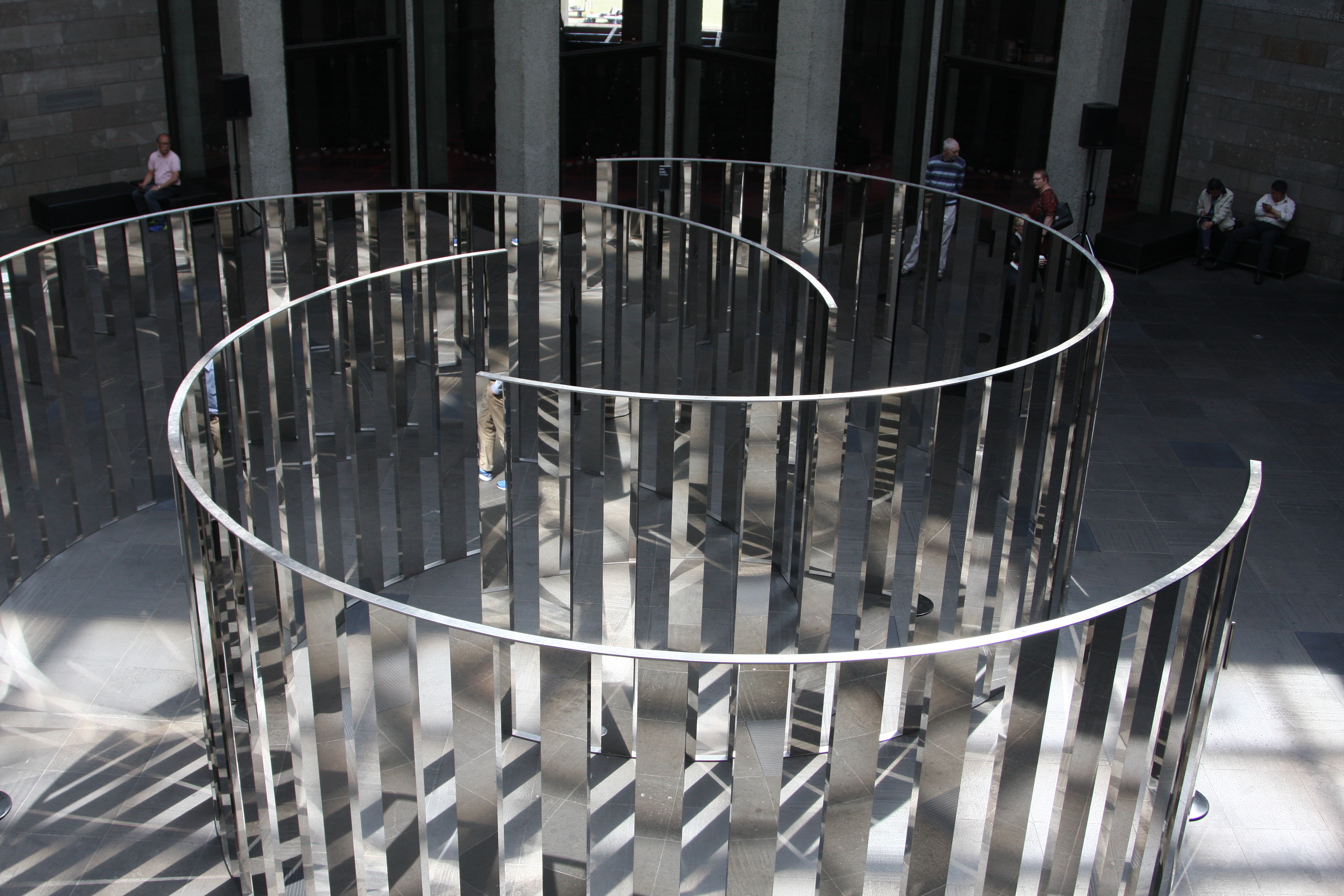 Ohhhh Melbourne. I’m not sure what I expected but being able to do so much for free sure wasn’t in my mind. Melbourne is a big city that has history, art, shopping, food, architecture, culture, coffee and chocolate. Oh so much chocolate. You can read about the chocolate and a few other things for Melbourne here.

The Melbourne Gaol
The Melbourne Gaol was my first stop and it had way more notorious history than Castlemaine’s. The women’s wing was demolished many years ago but a lot of the gaol still exists. The cell block was the only part I had a chance to see. Some of the cells are used to display the stories of prisoners along with their death masks but there are even cells with the names and stories of the hangmen. There are also several more buildings, and the courtyard, for you to see and read more history and stories.

While I was in one of the cells reading one of the prisoner’s stories, a lady came in with her adult daughter. The lady then proceeded to explain to her daughter and myself how her great-grandfather (I think there was just one great) had constantly been mistaken for this criminal who had been on the run at one point. Her great-grandfather had been given a hard time, had to repeatedly prove his identity and basically had a difficult time being harassed by law enforcement and the public who thought he was the criminal. Obviously it worked out for him in the end but still, that would have been an insane experience.

Part of the entry fee for the Melbourne Gaol is the Watch House tour that provides you with the experience of being arrested. I found this tour to be quite entertaining but also enlightening. We can imagine how tough life would have been then, or even now, when you are in trouble with the law but rarely are we able to experience it, even for a few, thankfully, fake minutes.

State Library of Victoria
A short walk around the corner from the Gaol is the Victoria State Library. It had this wonderful exhibit on when I was there about the Triple R, 102.7FM radio station that started out in the 70’s as a university education station and has grown into a large independent station. I found it quite interesting and I also really enjoyed all of the items they had on display from equipment used, to licenses, to a letter to the Pope, to membership cards and playlists, etc.

The library also boasts quite a lovely collection of paintings and photographs from Australian artists, all displayed in the Cowen Gallery which was originally part of the National Gallery of Victoria until that gallery moved in 1968. The north rotunda displays paintings and busts of early settlers and important individuals to the history of Victoria and the south rotunda displays the portraits of people who have contributed in some way to the Library’s collections. It was so different from the exhibit but also just as impressive. I am always interested in seeing art from the artists of a country I am visiting. Everyone has such different styles in their work, but the passion to create is always visible.

Not only did the Library have exhibits on, a gallery to visit, books to read, historical documents, books, memorabilia, newspapers, etc, but it also had beautiful architecture which was quite obvious in the Domed La Trobe Reading Room. It is round, four floors, has skylights in the domes ceiling, tables to sit at and read (or use the modern internet), as well as individual reading rooms. I have to admit to being so intimidated by the books and the sign that told you not to put the books back on the shelf after you took them off, that I didn’t read any. But I did really enjoy that room. Not bad for a free entry.

Queen Victoria Market
The Queen Victoria Market is easy to get to on the tram and it is inside the ‘Free Tram Zone’ which makes it that much better. I’m sure you have heard of this market, everyone talks about it, and rightly so. This is a huge, indoor/undercover market that has meats, fruits, vegetables, baked products, food court, as well as this whole section where you can shop souvenirs, clothes, shoes, handmade items, and almost anything else you can think of. There has been a market on this site since 1865. It is only open certain hours on different days and closed on Mondays and Wednesdays but on Wednesdays in the summer, it is also open as a night market. 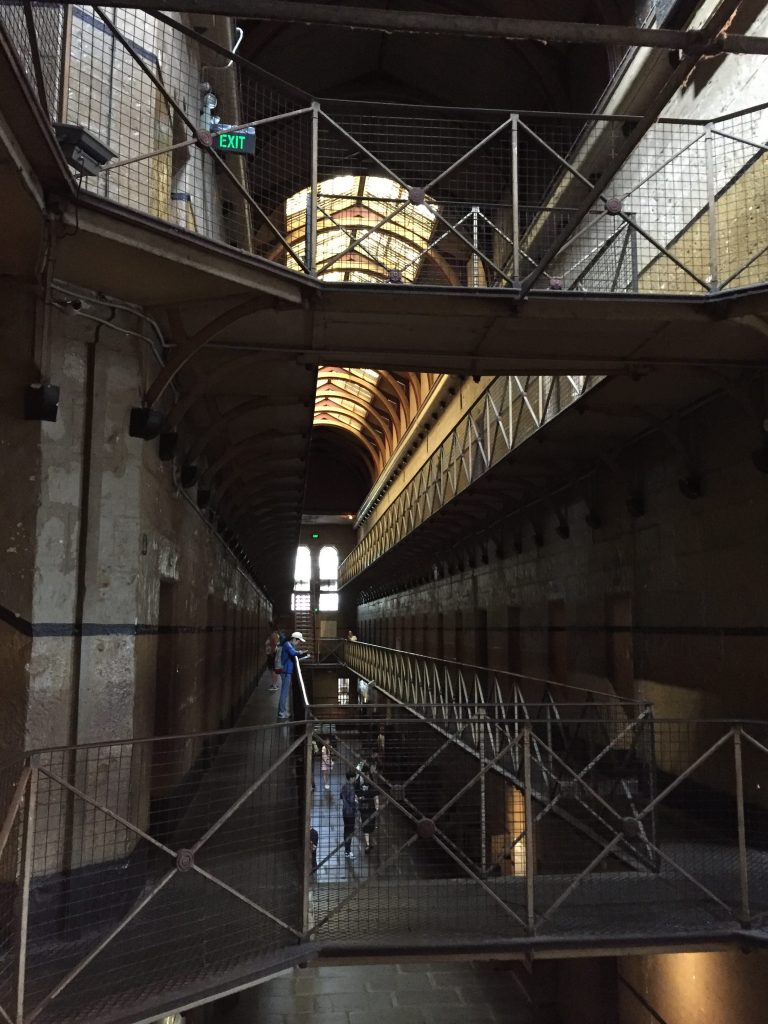 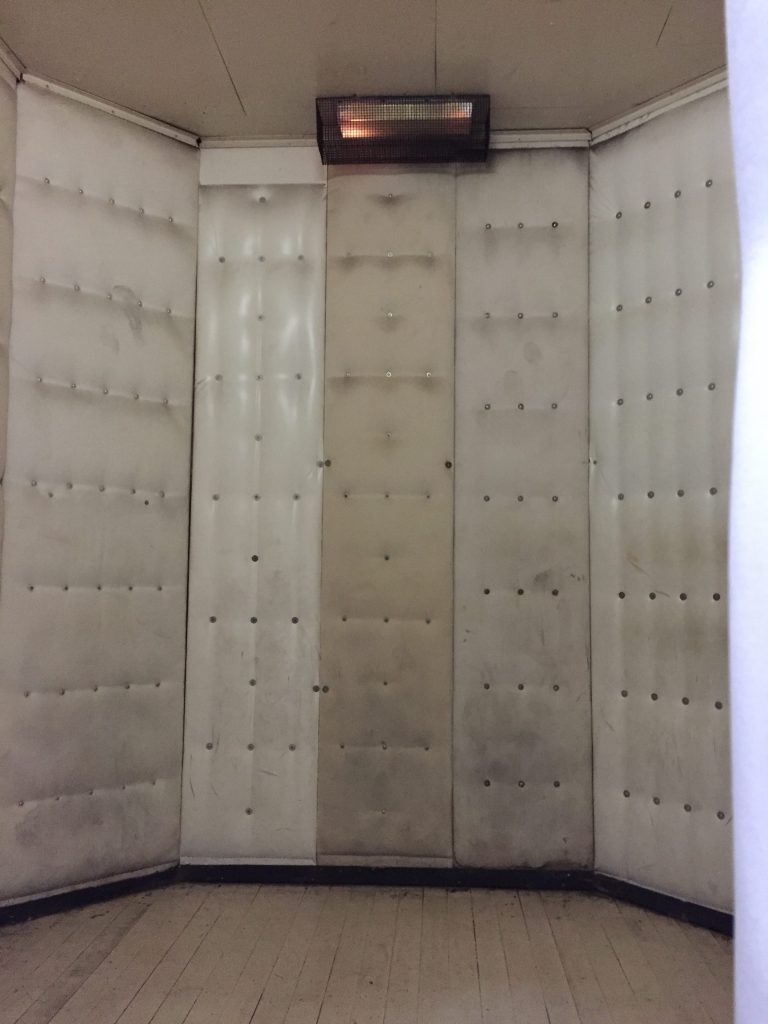 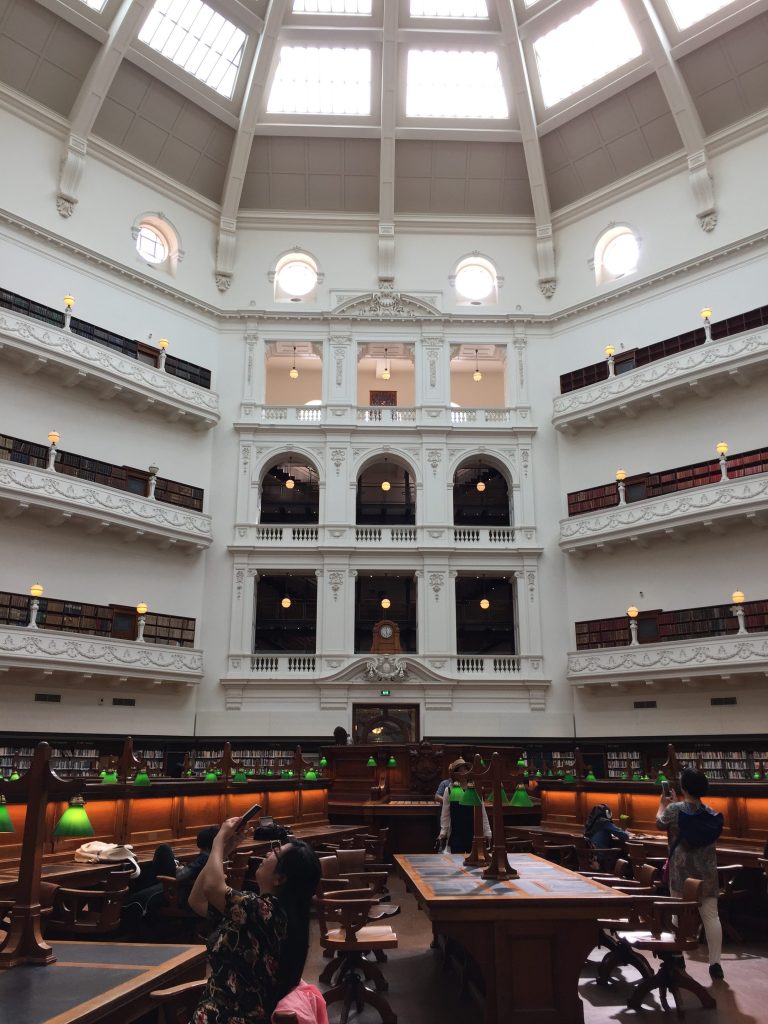 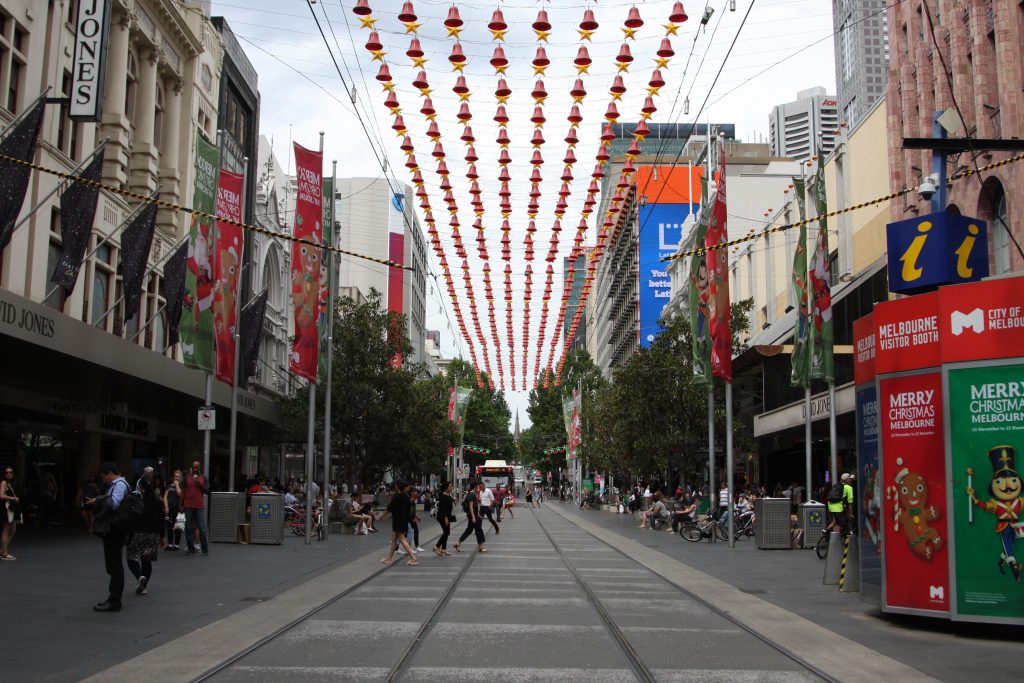 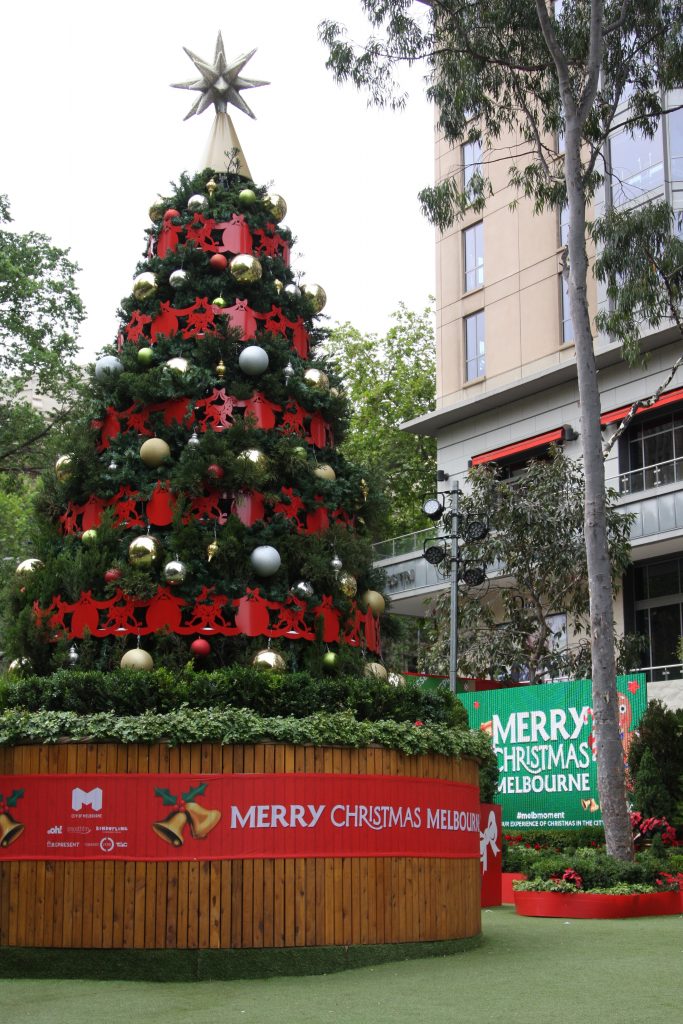 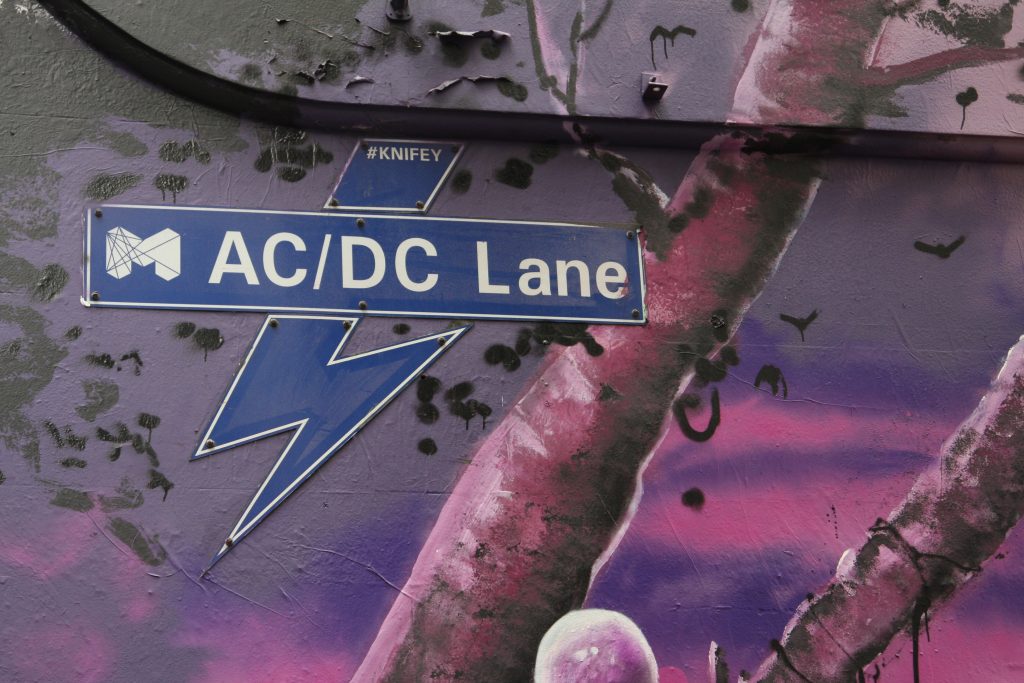 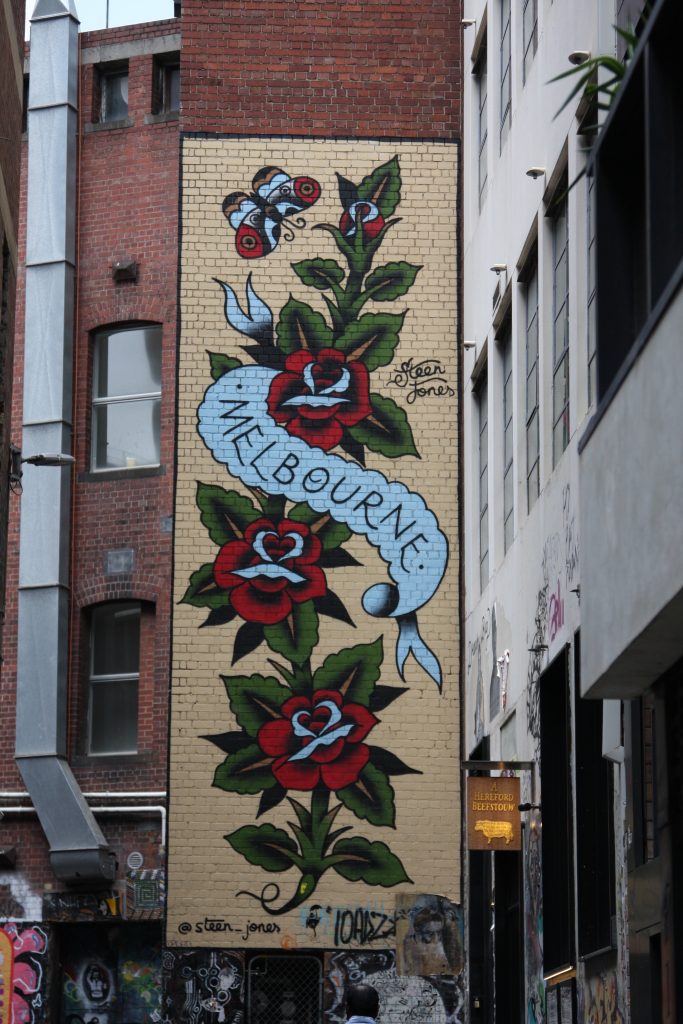 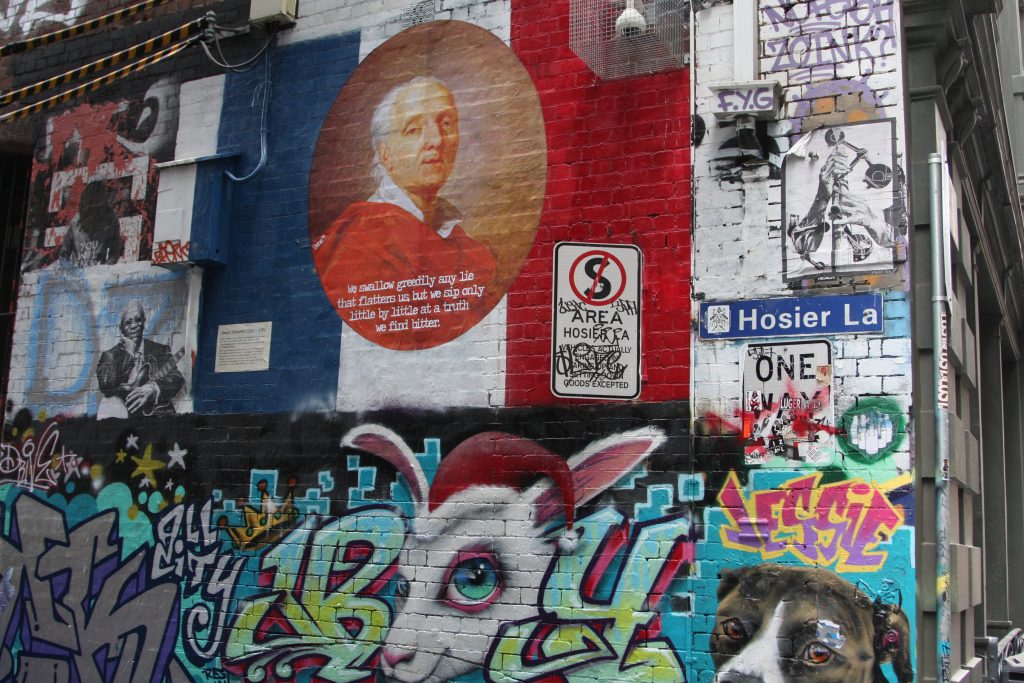 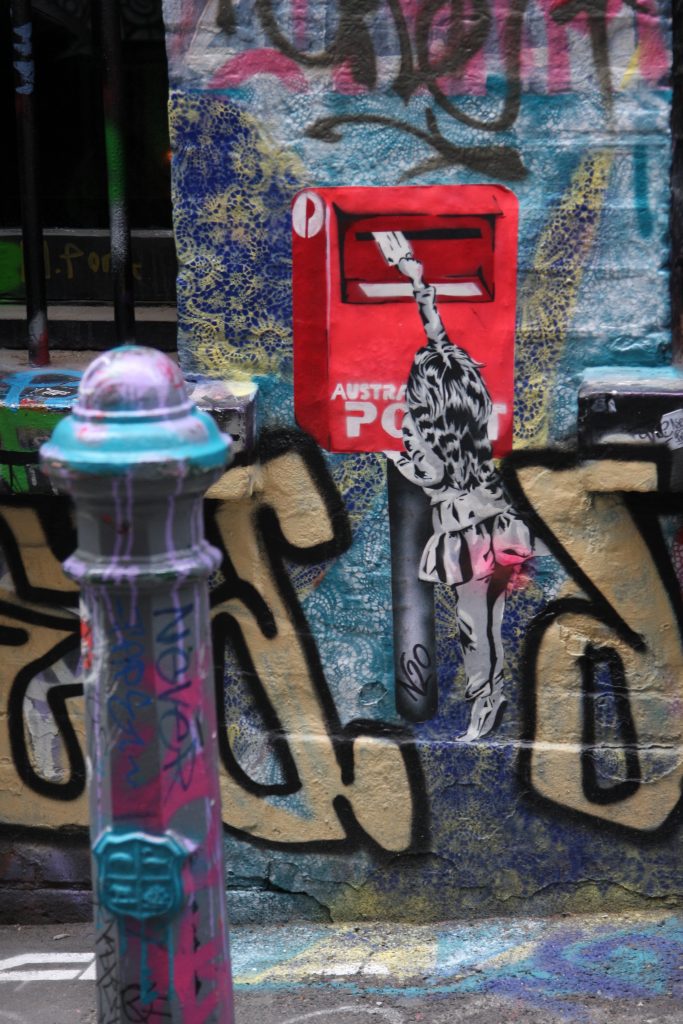 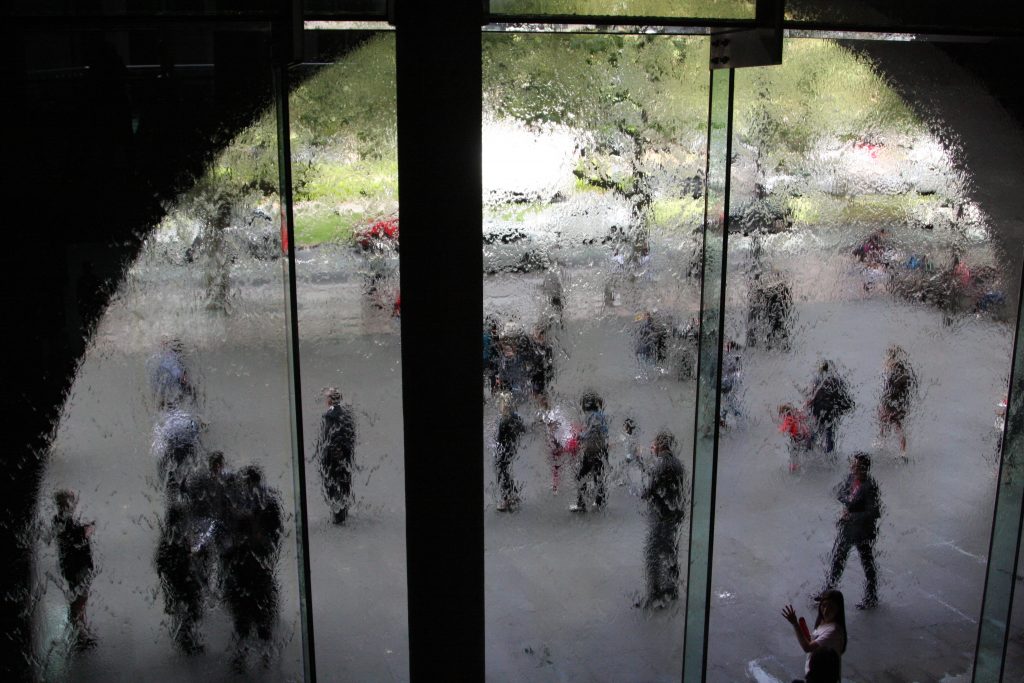 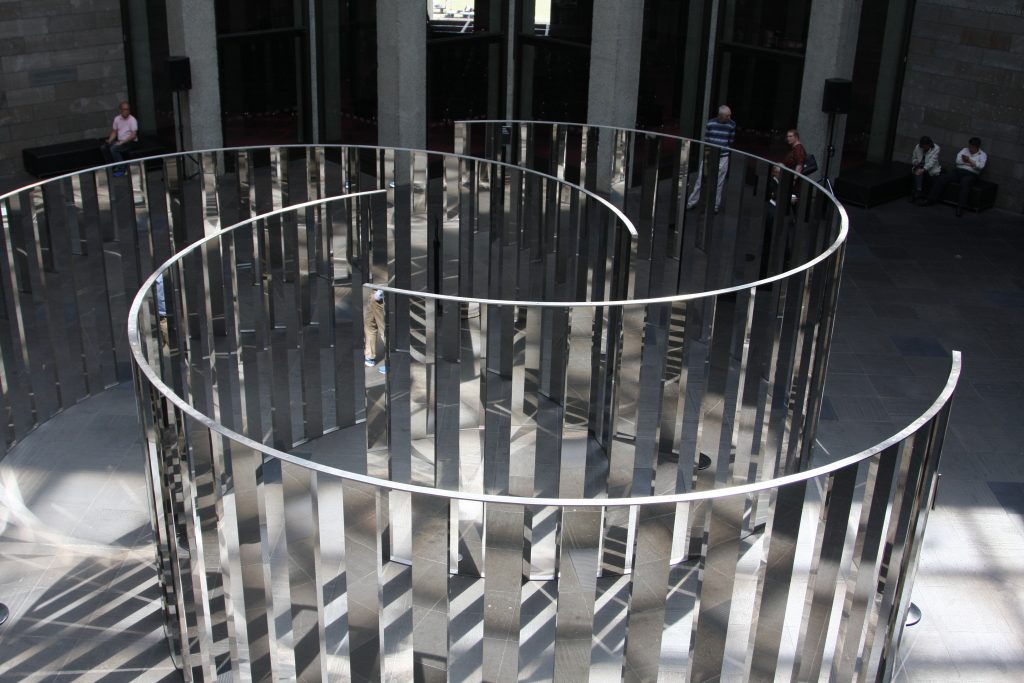 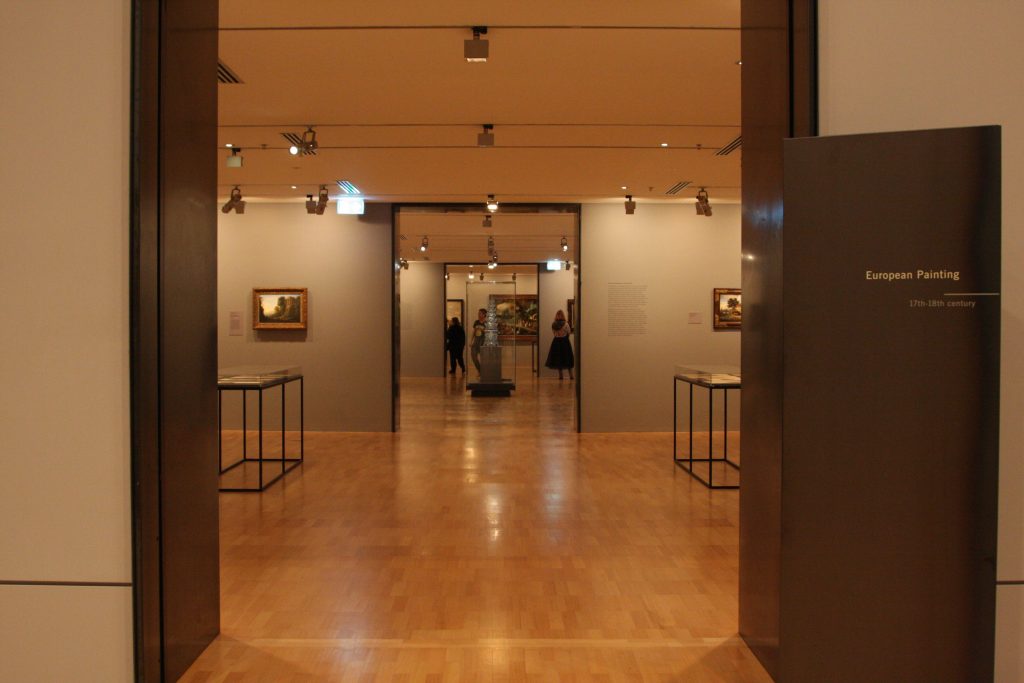 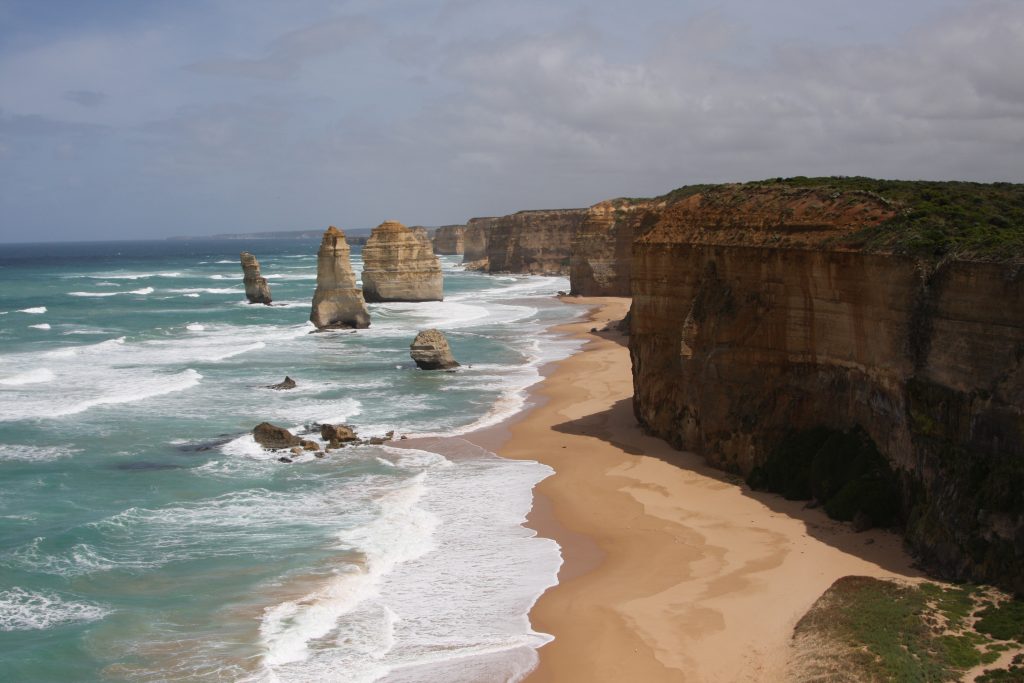 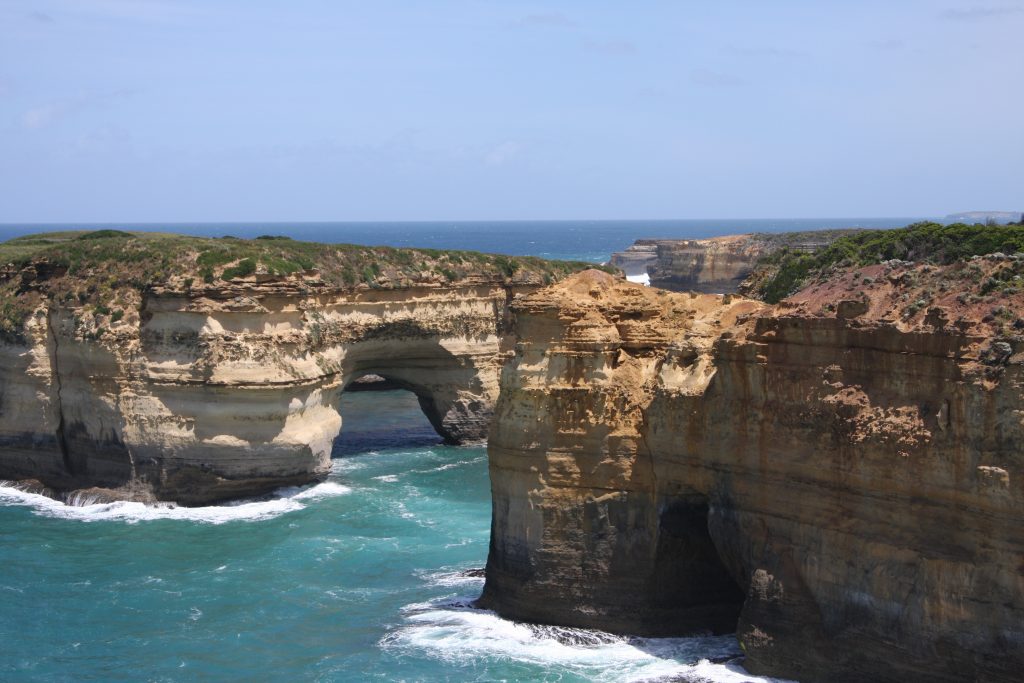 Walking Around
Melbourne provided some amazing sites to see while walking around the CBD (Central Business District). There was the AC/DC Lane and some alleyways that have graffiti covering them that can change daily because the artists are always changing or adding their work. And because I was there around Christmas time, there was also the Myer’s Christmas windows telling the story of One Christmas Eve by Corinne & Marjorie Crosby-Fairall. They were amazing and I also loved the story which was completely new to me. Around the CBD there were buildings decorated for Christmas, and there was the Christmas Square. It was a large area that was decorated, had a giant Christmas tree and had picture opportunities where you could dress as a present, etc. It was all so festive and made walking around looking at the architecture that much better.

The Melbourne CBD is also full of amazing shops and stores to shop in, from upscale items to more budget friendly ones. Everywhere you walk there is another arcade full of shops. There was a tea shop with a line-up outside for tradition afternoon tea, there were pubs, chocolate café shops, cafes, etc. Everything you need to eat, drink and then restock your closet with because now you can’t fit into anything. Also, there were solo artists and bands playing different styles of music, along the Bourke Street Mall.

National Gallery of Victoria
I like to check galleries out wherever I go, and I was really looking forward to the NGV because of its size but I was completely surprised when I walked around a corner and saw one of Rembrandt’s self portraits. This gallery has so much to show and it was spectacular with the items and art on display, unfortunately I didn’t get to see it all. It was such a lovely experience though and it had items from all over the world, from different time periods, as well as Australian artists. That is all just the free stuff and not including the different exhibits you can also pay to see. Oh, and don’t forget the water-wall entrance, which was spectacular. I also wish I would have had a chance to see the stained-glass ceiling.

Great Ocean Road and 12 Apostles Day Trip
One thing you do not want to miss when you are in the Melbourne area is the Great Ocean Road. You can take it as a day trip from Melbourne or you can take it as part of a longer, several day, trip between Melbourne and Adelaide. The 12 Apostles is such a visually impressive scenic location but you also stop to walk in a rainforest and stop to see koalas. I booked myself the reverse day tour with Viator, so you miss most of the other tour buses that are also along the route, but the tour was actually operated by Wildlife Tours Australia. The tour guide was knowledgeable and shared some entertaining stories, the pizza for dinner was delicious, there was an optional 15-minute helicopter tour, and the tour was a small group so you get to meet, and learn about, a bunch of fellow travelers. They offer pick-up and drop-off at a few hotels but for the rest of us, there was a centrally located pick-up spot at St Paul’s Cathedral. I am so glad I did the Great Ocean Road day trip, it was absolutely beautiful and it was a great day out of the city.

These were only some of things there are to see and do. I loved Melbourne. Not only does it have great art in various forms, great shopping, heaps of chocolate & food, but it also has an amazing vibe that makes you want to stay and visit again.

**Don’t forget, the bold titles are links for you to check out the third party sites.

If you are interested in or starting to plan a trip, there are several travel related products and websites listed on the Yup…..We Like These page, to help you out. Some of the affiliate link descriptions also contain a coupon code for you to use.